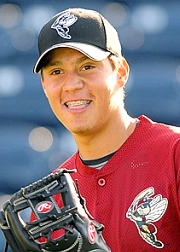 Reporter: How are you doing here? What’s the adjustment been like?

Reporter: How is your family?

Flores: Son buenos (they are good). Afterward, Lopez summoned Flores to his office. Laughing, he says,

Following his impressive debut in 2008, the Mets optioned to aggressively promote Flores, along with third baseman Jefry Marte, who, at 17 dominated Kingsport (.324/.393/.528) that summer, to Savannah in the South Atlantic League for 2009. While he undoubtedly struggled, Flores more than held his own in 528 plate-appearances, hitting .264/.303/.331, routinely showing the ability to consistently square up on the ball and make contact.

Thus, many experts have questioned the Mets aggressive handling of the duo. Yet, Lopez does not seem all that concerned, and concurred with the promotions.

“The guys, there going to play where they belong”, he says. “I thought Flores and Marte were where they were supposed to be last year. They took their lumps last year, but hopefully this year will be a big year for both of them.”

***
Flores’s second go-round in the Sally League contrasts sharply with his first year. After a scorching start to the year that put Flores, who could be a senior in high school, as the clear front-runner for MVP of the league- a title usually reserved for players four-five years older- he has cooled a bit in May, but his overall numbers are hardly shabby: .312/.378/.480.

Flores has also managed to increase his power dramatically, while not sacrificing plate discipline. His strikeout rate remains low (just 29 times in 225 plate appearances), but he is walking at nearly twice the rate (18 walks- 8% of his plate appearances). He is being more aggressive, hitting mistakes more often, while simultaneously laying off the breaking balls and changeups that plagued him in the past.

He still looks bad- at times very bad- on off-speed stuff. Scouts in attendance, however, rave about his exceptional bat speed.

Most of all, they wonder how good he will be when he finally fills out. Listed at 6’3″ 180, you could mistake him for a projectable pitcher. The Mets have emphasized working on his core strength; he still lacks much definition in his chest and midsection, and could conceivably add 25-30 lbs. of muscle over the next few years.

Flores himself attributes his improved performance to simply being more experienced.

“Last year i was kind of kind scared because I was 17, I was younger”, he says. “But this year I’ve been hitting very well. I know the pitchers. its’ kind of easier.”

“He is a lot more patient. He is a year older and a year more experienced. I think thats helped him out a lot. He has really narrowed down the strike zone. His approach has been great up until this point. Into his swing he is using his hands a little bit more than really getting into with his whole body. He is trusting his hands and his swinging at good pitches and he’s aggressive.”

Despite his batting prowess, Flores says his main focus right now is actually defense. Whether he can stick at short will determine much of his value going forward. Many experts assume he will have to move to a corner infield or outfield position, but some scouts are not ready to commit on that question, and believe he might just have the athleticism to play short adequately.

Equally important in his development, though, is his maturation as a person. His grasp of the English language is nearly perfect — something unheard of for Hispanic kids his age. While he does not have much to say with reporters, he is far more relaxed around the clubhouse, cracking jokes and talking to seemingly everyone.

“The key for me”, Lopez says, “is just making sure that i create a good environment for these guys to work everyday and play baseball. Its a game- there supposed to enjoy it. i think the more pressure the staff kind of puts on players the tougher it gets it doesn’t do any good for me or the coaches to put any more pressure. the biggest thing is making sure i keep my guys loose and go out and play bb and whatever happens happens but w/ the understanding that we play fundamentally. sound the outcome more times than not will be in our favor.”

“He [Flores] has taken up a leadership role. It’s impressive. 18 years old. He’s a lot of fun to be around.”

Back Mets Game 57: Win Over Marlins
Next Monday Mets Links