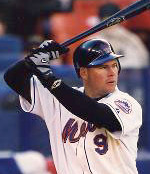 He would, however, likely represent an upgrade at second base going forward. For one, Luis Castillo has struggled mightily with the bat thus far (.241/.333/.277), his range continues to be a liability, his health is questionable, and while the Mets might be pressured to reap value out of his bloated contract, he would probably benefit from playing once-twice a week from this point on.

Both he and Wiggington are more or less equally destructive defensively. Offensively, though, fangraphs predicts Wiggington will hit .288/.341/.471 with a .356 wOBA in 308 plate appearances going forward. Castillo, meanwhile, is expected to hit .281/.364/.333 in 306 plate appearances. That is about average for a second baseman, but Wiggington still gives you about a 30 point edge in wOBA.

Assuming both provide equal fielding, Wiggington is worth about 3/4 more of a win going forward. That may not seem like much, but let’s remember the Mets lost the division by one game from 2007-2008, and are in a close division race right now. If Castillo’s injury bouts persist, the difference is augmented, with Alex Cora and Ruben Tejada your replacements. Not to mention, Wiggington can occasionally spot Ike Davis against a tough southpaw.

What will the Orioles demand for Wiggington? To determine that we must assess his value through WAR. Over an 150 game stretch at second, Wiggington is probably worth about -10-11 runs defensively, so he would probably cost around 6 runs going forward. Overall, though, when you factor in his bat, he is still worth about 1.6 wins the rest of the year. In monetary terms, that is worth about $6.75 million dollars. He is also owed the remainder of his contract- about $2.05 million. As a result, his “surplus value” is about $4.55 million.

However, there is more to Wiggington’s value. My guess is he will probably qualify as a type B free agent in the 2B/3B/SS group. Thus, if he were to decline arbitration and walk next year, the Mets would net a compensation pick next year, which on average is worth about $2.5 million. As a result, Wiggington’s surplus value is now $7.05 million.

The Mets must match $7.05 million in prospect value. Since it is difficult to predicts prospect’s future value, we can use Erik Manning’s table for projected value.

According to the table, Wiggington will likely cost either:

A) Grade B pitching prospect

I do not think anyone in the Mets system qualifies in scenario A. Jeurys Familia and Brad Holt have been too inconsistent to be a grade B, but they offer more potential than your prototypical C. Another smaller piece- perhaps a grade C hitter- would sweetween the deal sufficiently.

I think both deals would be a net gain for the Mets. The only player I would avoid trading is Havens. Most people will probably ask, “Why trade six years of Ruben Tejada for a three-and-a-half month rental of Wiggington? Remember, the Mets also potentially gain a compensation pick in next year’s draft. After all, is Tejada or Holt really worth much more than Anthony Ranaudo or Bryce Brentz or Nick Castellanos?

The Orioles are well out of contention, and would acquire greater value if they started selling some pieces now. Castillo is due to return soon, and the Mets stand much more to gain but acquiring Wiggington as soon as possible.