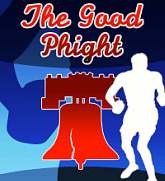 This could be a huge series for the Phillies. With the Mets licking their wounds, and possibly without four of their Opening Day starters, now is the time for Philadelphia to make a move upward. Winning the series — or sweeping it — could give the Phils the momentum and confidence they need to get back into contention. In contrast, losing this series — while the Mets are shorthanded — could be the decisive blow to the Phillies’ collective confidence, and bury them for good.

Let’s take time now to hear the viewpoint from the Philadelphia side, courtesy of David Cohen of the excellent Phillies blog, The Good Phight.

1. The Phillies are 7 1/2 games back, but there’s still plenty of season left. Heck, a 3-game sweep of the Mets would put the Phillies right in the thick of the race. What do the Phils have to do to climb back into contention?

The Phillies have to do the same thing that they’ve needed for the past several years – get better pitching. As they did last year, the team leads the NL in runs scored. But, they’re last in team ERA. (First in offense, last in pitching — any wonder they’re a .500 club so far?) And it’s not just the much-maligned bullpen. Their starters are 14th in team ERA, as they were last year. Bringing in Freddy Garcia and Adam Eaton and moving Brett Myers to the bullpen has not improved the team at all.

2. Do you think Charlie Manuel will last the year as manager? If not, who are the candidates to replace him?

Yes. He’s not the best in-game tactician, but he gets a lot out of his players. The fault here lies completely with Pat Gillick’s talent acquisition, not with Manuel’s talent use.

3. What’s going on with the bullpen? With Myers and Gordon out, who is the closer for now? Who is setting up?

As feared, the bullpen is bad – although not as bad as the starting pitching (4.72 bullpen ERA v. 4.83 starter’s ERA). Geoff Geary, Ryan Madson, and Myers and Gordon when healthy have been pretty good. Even Antonio Alfonseca has been decent. The team has just gotten terrible performances from most of the rest of the bullpen. Who’s the closer? Got me. Maybe Alfonseca, Madson, or Geary, or maybe Steve Bedrosian or Al Holland.

4. Speaking of Myers, what is your opinion of him as a closer? Is this a long-term solution?

I hate him as a closer. I think it’s a waste of his skills and talent to use him in only 60 to 80 innings a year when he can be a starter and pitch 220. Unless he’s used as a flexible high-leverage multiple innings 70s style stopper (which Manuel doesn’t really have the managerial skill to do), he’s got too much talent to waste in just one inning two games out of every five.

5. Is Aaron Rowand for real? What is the inside scoop on his sudden emergence as a hitter?

Rowand is having a great year at the plate. I think he’s playing way above his talent level, but the team needs to identify that sometimes players do this and ride it for as long as it lasts. He should not be in center field though (Victorino has better range and a better arm), and we fans have to pray that the team doesn’t sign him to a very rich long-term contract based on this year. I’m very scared of that, given how much Rowand’s hustling goatee-clad wall-crashing persona fits with the Philly image.

6. Ryan Howard is finally back and mashing the ball. However, the lineup after his spot in the order has been less than imposing. Do you think Howard’s production will diminish as teams pitch around him? For example, do you think he’ll start pressing and/or chasing pitches he shouldn’t?

No. Howard is too good a hitter to worry about protection. He didn’t last year (check out the chart showing that it didn’t really matter who hit behind him). The best protection for Howard is having a runner on first base. With Rollins, Victorino, and Utley hitting in front of him, I’m not worried about this.

7. How long before Pat Burrell is assassinated by a covert operation directed by Phillie fans?

I think they’ve already sucked out his hitting talent and replaced it with Abraham Nunez’s skill set. OK, maybe it’s not that bad yet, but something’s wrong with him – either it’s all getting to him, or he’s injured, or he’s just past his peak and this is the downside of his career. Whatever it is, without him swinging a powerful bat, the offense isn’t as good as it should be.

8. Last year the Phillies received a jolt from the promotion of Cole Hamels. Are there any other youngsters on the farm who might have a similar impact this year?

No. The Phillies farm system is absolutely atrocious at the AAA and AA levels. There are some prospects below that, but there’s nothing in the immediate future to inspire excitement like Hamels last year. How bad is the Phils’ upper-level minors? Their AAA team has only 11 home runs so far. Check out the numbers here — Power Outage in Ottawa.

9. Ninth inning, tie ballgame, man on third, two outs. What Phillie do you want to see at the plate?

Chase Utley. Because if he gets walked, Ryan Howard is behind him.

10. Same situation, but the Mets are up. What Met would you least like to see batting?

Carlos Delgado. I know he’s had a rough year so far, but he’s killed the Phillies in the past few years, both as a Met and a Marlin. Although, this is a close call with Jose Reyes, only because I’d have to listen to one of our announcers, Chris Wheeler, praise Reyes (whose last name he pronounces Rey-ASS) as if he’s the Messiah.

Thanks again to David for his Philadephia-based insights. Be sure to check out The Good Phight for more coverage on the Phillies.

Back Series Preview: Mets vs. Phillies
Next Mets Fans Speak on Philly Blog