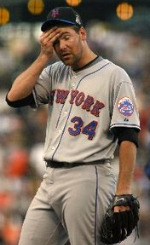 The replays didn’t show whether, or where, Mike Pelfrey’s errant fastball clipped Scott Rolen, but how the Mets’ pitcher responded to not getting that call, and not getting a later call on a strike to Drew Stubbs was the backdrop of Cincinnati’s six-run fifth inning and subsequently last night’s loss to the Reds.

Pelfrey didn’t lose last night because he didn’t get a couple of calls. He lost because of his reaction to not getting those calls.

Whereas Pelfrey had been composed most of this season, he became flustered and unnerved. Whereas he had minimized damage he dug himself into a hole the Mets could not dig out of. His body language spoke of frustration and anger.

Pelfrey couldn’t stop the bleeding. He didn’t do his job, which, is when things go awry to remember he still needs to get outs.

“I thought, for the first time in over a year, I let my emotions get the best of me,’’ Pelfrey said. “And, that wasn’t very good on my part.’’

Pelfrey’s last few starts did not have the crispness he’s had all season. He gave up seven runs last night and 11 in his past two starts, neither of which he made it out of the fifth. He’s given up runs in the first inning of his last six games. All of a sudden, he’s been susceptible to the home run.

While the All-Star talk has died down, it’s too early to say if he’s regressed of simply hit a rough patch. Maybe he’s going threw a dead arm period. I don’t know. But, what I do know is Pelfrey has pitched too good for too long in the first half for panic.

That he acknowledged his downfall and accepted responsibility is a great sign, another step in his ascension to becoming an All-Star caliber pitcher.

Perhaps more than any other start he’s made in the first half, Saturday’s game against Atlanta could be his most interesting if not revealing.

John Delcos has covered Major League Baseball for over 20 years, including more than ten in New York on the Yankees and Mets beats. You can read Delcos on his blog, New York Mets Report, where he hosts a chat room for each Mets game.
Related Articles
Recent Comments
Recent Posts
Subscribe to Posts (RSS)