Mike Pelfrey is not struggling with a “dead arm” issue, despite what he thinks and despite what the Mets’ dinosaurs coaching staff would like us to believe.

If Mike Pelfrey has a problem that is affecting his performance, it is a mechanical flaw that has crept up here and there sporadically since last spring. It’s very, very subtle, but it can be avoided.

Check out these two stills, one taken from Pelf’s June 1 victory in San Diego and the other taken from his last start against the Reds: 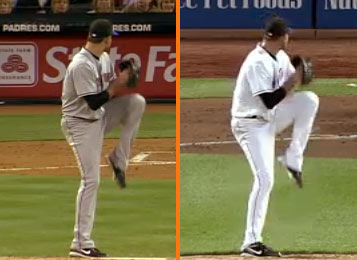 Again, it’s very subtle, but do you notice anything different in the two photos?

In the left image, Pelfrey is slightly more upright as he begins his descent from the knee lift and is about to take the ball out of his glove. In the right image, see how he’s just slightly hunching his shoulders and leaning a hair toward third base? It seems like a little thing but it is enough to throw off his balance and cause his body to make a contrasting adjustment — which in turn throws off his mechanics just enough to affect his command. As Sir Isaac Newton once observed, “for every action there is an equal and opposite reaction”.

I’ll go further into this later, but in case you are watching the game, keep an eye on Pelfrey’s upper shoulders and his follow-through. When you see that little lean over, you will see his follow-through take him toward 1B, and the ball will likely be off-target. When you see him straighter, you’ll see a follow-through more in line and facing home plate — and likely his pitch reaching its intended target.