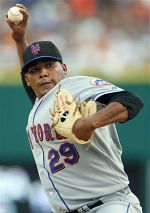 Who is this guy in Jorge Sosa’s skin?

With each game, it becomes more clear that he picked up more than mechanical improvements while in N’Awlins … there had to be some voo-doo involved as well.

Sosa won his sixth game in seven starts, shutting out the MLB leader in runs over eight innings, allowing only four hits and two walks and striking out five, using 116 pitches in the process.

Sosa’s slider was devastating, and his fastball had good movement, but he also benefitted from a generous strike zone and some fantastic fielding plays — particularly by Jose Reyes, Carlos Gomez, and David Wright. The Mets defense seems to turn it up a notch when he’s on the mound, so the survey to the right — who is the Mets’ stopper — may well be answered with Jorge Sosa.

As well as Sosa pitched, Tigers’ journeyman Chad Durbin was nearly as good, also going eight full innings. He gave up only six hits and three walks, but made mistakes against David Wright and Carlos Delgado that wound up over the fence. Wright’s fourth-inning, two-out blast was sent over the opposite-field, rightfield wall, and Delgado drove a prodigious shot well into the right-center stands leading off the seventh. Delgado added a shallow sacrifice fly in the ninth to score Carlos Gomez — who by the way left a bit early but got away with it.

Paul LoDuca was the DH and remained hot, going 2-for-4 while Ramon Castro caught.

The homers by Wright and Delgado were the tenth of the season for each batter.

Ricky Ledee made it to Detroit in time to start in leftfield. My stomach felt great until I saw his name etched into the ninth spot in the order. Luckily he didn’t hurt anyone.

Billy Wagner pitched a perfect ninth, striking out two and touching 97 MPH a few times on the radar gun.

The Mets and Tigers do it again at 3:55 PM EST, with Oliver Perez going against Jeremy Bonderman in what promises to be another pitching duel. Unfortunately, the game is carried by FOX. Fortunately, most TV remote controls today come with a MUTE button.

Back Ricky Ledee Promoted
Next Mets Game 60: Loss to Tigers