Catching: How (Not) To Frame

There was a lot of jibber-jabber from the Mets bench on Sunday afternoon as home plate umpire Phil Cuzzi was inundated with a number of borderline pitches. It’s very hard to tell from the TV screen whether Cuzzi was right or wrong, since the off-center angle of the centerfield camera can make pitches that are balls look like strikes, and vice-versa. The best angle is directly behind home plate, of course — and it is the only angle that matters.

Toward that end, it is extremely important for the catcher to be skillful at properly receiving the baseball. For years and years and years, baseball coaches at every level have huffed and puffed about “framing”: the idea of catching the ball in one place (off the plate), but “easing” it into another (the strike zone). It’s considered very savvy to do so, and it seems to be taught even to little leaguers; everyone who “knows anything about catching”, knows about framing.

The catcher’s first job is to make sure that strikes look like strikes. The way that’s done is by catching a side of the ball — generally, the right side, left side, or top side. The receiver should catch it and “stick it”; meaning, hold the ball for a moment exactly where it’s caught, as if posing for a picture. By catching the “correct” side and then holding it, the catcher gives the umpire an excellent view of the baseball. If you have a pitcher who is throwing a lot of strikes — and that IS the goal, isn’t it? — then you want to make sure the umpire can see those strikes very clearly. If a catcher feels it necessary to constantly be “framing” or “easing” his glove in toward the plate, then it’s time to remove the pitcher. Unfortunately, “framing” becomes a habit, and after a while, umpires lose their trust in the catcher’s receiving. Sometimes, an umpire behind a catcher who habitually “frames” may decide on a pitch a split second earlier than he normally would — before the movement of the catcher’s hand disrupts his vision. As a result, the catcher actually loses real strikes, makes his pitcher think he’s throwing more “strikes” than he really is, and makes the umpire look bad.

It’s hard to demonstrate the difference between proper receiving and improper receiving from the centerfield camera; you really have to see from the angle of the ump to truly visualize the difference. But basically, the catcher wants to catch a side rather than the “back” of the ball. I would say 80% to 90% of big-league catchers catch the “back”, and then try to “frame”.

One catcher who catches the side of the ball is Buster Posey of the Giants. See below. 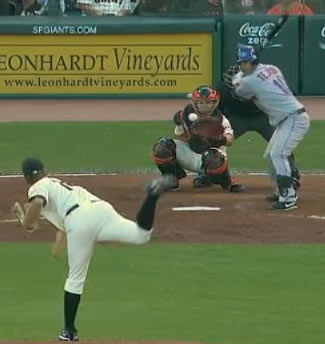 As the pitch is moving in, Posey begins shifting his upper body slightly toward it. He is also starting to reach out slightly to beat the ball to the spot. 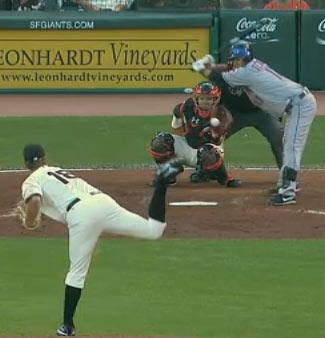 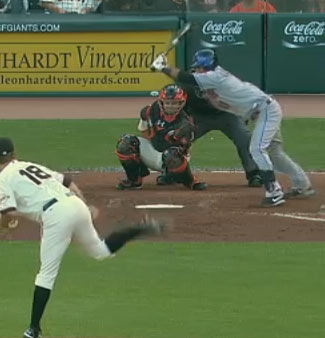 It's a borderline pitch, but Posey catches where it's pitched and 'sticks' it. The result is strike three

Now, take a look at Henry Blanco catching the back of the ball and “framing”. 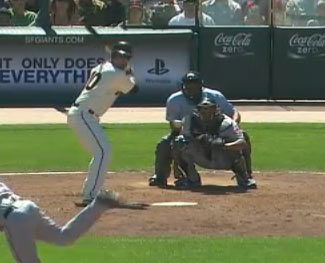 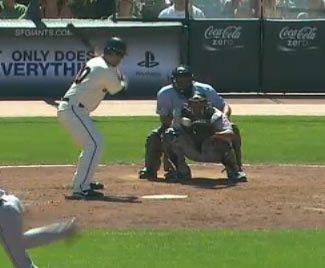 The ball is tailing outside, but Blanco doesn't move. 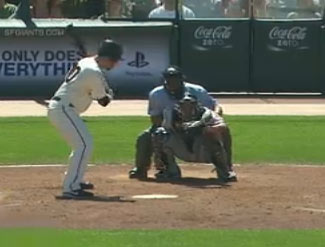 Blanco catches the back of the ball; note his elbow jutting out to the right. Also note the ball has drifted to the corner of the plate, and most of Blanco's glove is off the plate. Had he caught the side of the ball, most of his glove would have been on the plate. 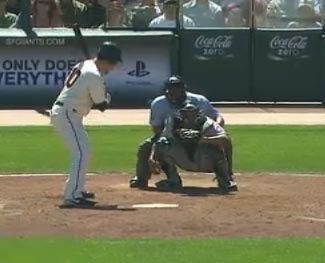 Blanco finally moves, AFTER catching the ball. It is barely noticeable, but he has eased his glove back toward home plate. The umpire isn't buying it, but the pitcher and everyone else in the park thinks the ball is a strike.

The above stills of Blanco were taken from the pitch that Phil Cuzzi called ball two on Travis Ishikawa in the bottom of the ninth of Sunday’s game in San Francisco — the pitch that caused Blanco to turn around to argue with the ump, got K-Rod fired up, and caused Jerry Manuel to run out from the dugout. Again, it’s tough to tell from the angle we have from the off-center camera, but the issue is not so much whether the pitch was really a strike but rather that Blanco could have done a better job of presenting the pitch as a strike. Had Blanco reached out with his glove (as Posey did) to “beat the ball to the spot” — i.e., catch the ball when it was still a strike — and caught the side of the ball (so more of his glove was on the plate rather than off), and then “stuck it”, he might’ve had a better chance of having that pitch called a strike.

You can kind of see the effect from this front view, but the real difference is when you see these two catchers receive the ball from behind — from the umpire’s perspective. The difference is like night and day, trust me.

Back Mets Game 92: Win Over Giants
Next A Stiff Neck Could Be Good for Pelfrey