Here’s the official recap: In the top of the second, Carlos Delgado singled in David Wright to put the Mets ahead one-zip. In the bottom of the second, the Dodgers hit three consecutive homeruns to go ahead 3-1 and completely deflate the Mets. The Dodgers added an insurance run in the sixth on an RBI single by Matt Kemp that chased Luis Gonzalez home.

Now for the unofficial ranting …

Though the Dodgers won by only three runs, the game wasn’t even THAT close.

There comes a time when a team must close the doors, have a collective beer, take some quiet time of introspection, and decide what it is they want to do for the remainder of the year.

It’s that time for the Mets. 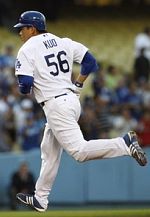 Injuries notwithstanding, the Mets have played lackluster, uninspired baseball for about three weeks now. Their last two weeks have been particularly atrocious — when it comes to passion, not skill nor execution.

In this game against the Dodgers, the Mets lost their eighth game in nine tries, but it wasn’t the final score that was disturbing — it was the complete apathy displayed in their effort.

John Maine pitched a pretty good game. Not bad, not great, probably good enough to win. However, he gave up three homeruns on three consecutive pitches, and that five-minute flakeout cost him the game.

Maybe you can excuse Maine for zoning out during that time frame — or perhaps even give the Dodgers credit for their ability to drive the ball over the fence (so what if LA is 29th in MLB in homers? so what if Wilson Betemit — who hit the second blast — was hovering around the Mendoza line before the game began?). What can’t be excused is the lack of fire on Maine’s part after the third homerun was hit by Hong-Chih Kuo.

Kuo’s career batting average is exactly .100. He had no homeruns — in fact, only one extra-base hit — before this game. Yet after making contact with Maine’s fat fastball, Kuo flipped the bat away, admired the ball as it flew over the fence, and jogged around the bases in a manner that recalled Dave Henderson or Billy Hatcher circa 1986. Despite this obnoxious display of disrespect, Kuo did not need to leave his feet the next time he came to bat. In fact, he dug in and took some pretty healthy cuts.

Granted, there was one out and a man on first when he came to bat, and yes you want to retire the pitcher for the second out in that situation. And yes, the man on first stole second and advanced to third on an error, so at that moment it was crucial to make sure to take advantage of the pitcher’s presence in the batter’s box right there. But Maine did not even consider buzzing Kuo under the chin on an 0-2 pitch — he struck him out on three straight pitches. Many of you may say, well, isn’t it better to get the strikeout there? In the short term, yes. Over the long term, no. Absolutely not. Right then, right there, Kuo has to go down — or at least, he has to dance. The feet have to move. There’s no reason to hit him intentionally, but there’s no reason not to send the message of an inside pitch that says: “hey, we noticed your last time up. We don’t approve.”

Instead, he takes three confident swings, feet firmly planted. Maine — and the Mets — win the battle but they lose the war. They’ve sent a message all right: “go ahead, step on us, we’re a doormat anyway. Feel free to crap in our hat, we kind of like the squishy sound it makes when we place it back on our head.”

And we thought the team’s apathy had exited with Steve Trachsel over the winter.

There were a handful of other “little things” that occurred during the game that were equally disturbing. Carlos Delgado pussyfooting around the bag when 150-pound Juan Pierre came stomping toward him. Jose Reyes shying away from an errant LoDuca throw on an attempted steal. Too many careless at-bats to count.

When I played high school football, our coach called it “going in the tank”. It meant you quit, mentally and emotionally. It didn’t matter anymore, you were just going through the motions, waiting for the game to end. That’s where the lifeless Mets are right now — in the tank.

David Wright remains red-hot — though for naught — as he went 2-for-3 with the only run scored.

Scott Schoeneweis threw an entire at-bat without giving up a run. His ERA is now only slightly above seven.

Not sure why the Mets bothered to take their at-bats in the last two innings. It was waste of time for everyone.

Why is Damion Easley pinch-hitting against Jonathan Broxton in the 8th with the Mets down by three? And why didn’t anyone tell him to take the donut off his bat before he stepped into the batters’ box? Sure, he’s a “high-ball hitter”, but that’s against guys who can barely crack 90 MPH. And in any case, Easley’s only skill is the ability to pull a mistake into the bleachers — and he can’t hit a grand slam with no runners on.

Aaron Heilman threw a nice eighth inning. He seems to do very well when the game is not on the line. That will be helpful when he’s traded at the end of July to a team out of the pennant race.

Before this game, Kuo had walked 7 batters in 13 innings this season, and 33 in 59 for his career. That comes out to around four or five per game. Only one Met walked in his seven innings of work: John Maine — who is generally not allowed to swing until he has two strikes against him.

Former Met Brian Bannister threw seven shutout innings against the World Champion Cardinals to win his third game of the year for the Royals last night. The man he was traded for, Ambiorix Burgos, has been shut down indefinitely due to an elbow injury.

The Mets plan to lose their ninth game in ten tries, and be on the receiving end of the second straight ass-kicking series sweep, beginning on Wednesday night at 10:10 PM (again … what does the West Coast have against afternoon games?). Jorge Sosa puts his head in the noose against Brad Penny, who may very well throw a no-hitter against the zombies in Mets uniforms.

Back 15 Reasons Not to Panic
Next Are You a Bad Mets Fan?