Why Tejada and Not Turner? 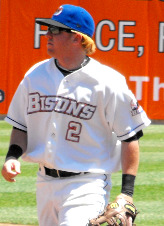 Upon the youngsters’ arrival, manager Jerry Manuel announced that Ruben Tejada would be installed as the everyday second baseman, Luis Castillo would go to the bench, and Fernando Martinez would enter into a platoon with Jeff Francoeur in left field while Jason Bay recovers from a “mild” concussion.

I get the part about F-Mart … sort of. OK, not really. I don’t get the F-Mart promotion at all. He was hitting .250 in Buffalo, and was only hitting that well because he hit a mild hot streak in the past two weeks. It’s not like he’s setting the world afire. Martinez has yet to play more than 90 games in any one season, so I thought the plan was to give the poor kid a full season of continuity somewhere, to see if he could actually develop his skills. Instead, the Mets promote him again, despite him not earning it, and put him into a role where he won’t get the regular playing time he so desperately needs. I guess the thought process is that he might be better, offensively, than Jeff Francoeur and/or Jesus Feliciano.

As for Tejada, it is another example of promoting a kid who doesn’t deserve to be promoted.

Additionally, Turner is still “young” — particularly in Mets terms — as he is 25 years old and won’t turn 26 until late November.

So why in the world is Ruben Tejada being prematurely promoted and handed a big league job, when Turner has paid his dues and proven since 2006 to be a superior offensive player?

The only thing that makes sense is that Turner was someone else’s reject, while Tejada is one of Omar Minaya’s handpicked gems. Funny, that’s exactly how Fernando Martinez might be described. The performances of F-Mart and Tejada are directly tied to Minaya’s reputation as a talent evaluator. Interestingly, Minaya is safe from criticism if they both flop, since F-Mart is only 21 and Tejada is 20. But if they can just hold their own at the MLB level — i.e., not embarrass themselves — then Minaya looks like a genius. Who knows, one of them might get hot and earn Omar another 3-year extension.

Considering that the Mets’ season is all but over, Minaya is due for some serious criticism. Though the Wilpons claim his job is safe, he will still have to publicly justify his job as the GM. He couldn’t make a trade, so the next-best thing is touting the “strength” of the farm system — which he can take credit for developing. Promoting two kids who would be better off honing their skills in the minors is a safe gamble that will, in the end, make Minaya look good. To the average fan, it makes the Mets look good, too, because it “proves” that their farm system is “strong” as it can “produce big leaguers”.

What flavor of Kool-Aid do you prefer?