What Happened To the Pitching Philosophy?

Last night I watched the Mets 1967 Yearbook (god love the DVR). They showed clips of Tom Seaver, Nolan Ryan, and Jon Matlack, among others. Something I kept seeing, over and over, with every pitcher in a Mets uniform, was this:

– a step back behind the rubber that started momentum going forward

– momentum continuing forward, evidenced by a follow-through that had the pitcher completely square to and facing home plate

, which is out of print but may be in your local library) and it appears they were taught by the Mets organization in the 1960s. I say this because I lied before — the one pitcher whose delivery didn’t exhibit all three of those elements above was Jon Matlack.

The footage was of Matlack’s very first season as a pro, when he was fresh out of high school at age 17 and he had some side-to-side momentum driven by his hands and arms that led to premature opening of the front side. Additionally, he didn’t fully use his 6’3″ frame to his advantage in terms of the gift of gravity — he stayed somewhat upright. In other words, his mechanics were slightly flawed. But by the time he reached the big leagues in 1971, his delivery had been adjusted so that it resembled that of Jerry Koosman, Tom Seaver, Tug McGraw, and others. For example, his stride was lengthened, he had some “drop and drive”, he lined up his nose to his toes at release, and had momentum driving more forward than sideways. There were still some minor flaws in his motion, but for the most part, after 4+ years in the Mets minor league system, Matlack’s delivery was more efficient and in line with those crazy “laws” that the British guy Newton set 400 years ago.

Somewhere along the line, the Mets stopped teaching those essential fundamentals and in turn, stopped manufacturing pitchers. It may have happened briefly in the 1970s, but the system had a strong run in the 1980s when Nelson Doubleday was a quiet owner who let Frank Cashen run the show. It seems that the “voice of reason” that was behind the Mets’ pitching philosophy was silenced for good at some point in the 1990s. Why? I’m not sure. Maybe it was the retirement or removal of one of the “old-school” guys — Al Jackson is still around, but perhaps no one pays attention to him any more? It’s strange, and it’s a shame.

There is an ironic quote by Matlack from 1978 cited on a blog post published around this time last year by my friend John Strubel. The quote is from a conversation between Matlack and Seaver, which occurred after both were traded away from the Mets:

“I completely can not understand it,” said Matlack. “There’s no way I can fathom how, when I was in the minor leagues, they had the best system, the best talent. When I came to the major leagues, we had the nucleus of a dynasty, with our pitching and defense, we went from the best baseball city in the country to an absolute joke.” 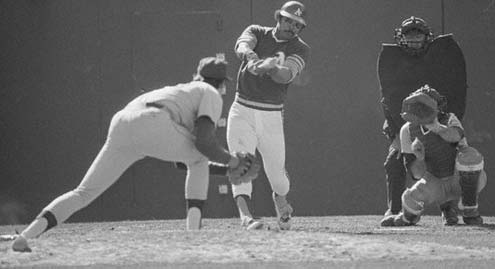 Jon Matlack gets low and drives forward vs. Reggie Jackson