Home » Off Topic » Off-Topic: Should We Be Curious About Jose Bautista?
4
September 28, 2010 Off Topic Joe Janish

Off-Topic: Should We Be Curious About Jose Bautista? 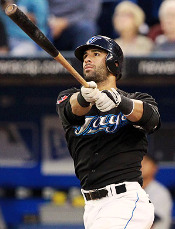 Jose Bautista has 52 homeruns (as of this writing). Prior to this year, he has never hit more than 16 in one season in the big leagues (though he did hit 24 in the minors in 2005). Granted, some people are late bloomers, and some benefit from a “change in scenery”.

But 52 homeruns? Shouldn’t we be just a wee bit curious? Like, Brady Anderson curious?

I am not saying that Jose Bautista has done anything wrong. Heck, George Foster once hit 52 homers — after never hitting more than 29. And Roger Maris hit 61 in ’61, despite never before and never again hitting as many as 40. So it’s entirely possible for a baseball player to have one incredible, astonishing season, even if he has never before shown to be much more than average.

Assuming Bautista’s performance this year is on the up-and-up, it couldn’t happen to a better guy. By all accounts he seems to be a good guy, hard worker, and team player. He’s always been a hustler and never seemed to be entirely appreciated in Pittsburgh, for whatever reason. As a third baseman, he had some pop but only a so-so glove; as an outfielder, his defense was slightly more tolerable but he didn’t have enough pop to justify a corner spot. He showed a decent bat in the minors (.842 OPS) and was fairly disciplined as a big leaguer (68 walks in 142 games in ’07).

Oh and yeah, he once was a Met — he, Ty Wigginton, and Matt Peterson were traded to Pittsburgh for Kris Benson and Jeff Keppinger at the deadline in 2004. But fans shouldn’t get on the team for that deal, because again, Bautista never displayed anything to suggest he’d be a 50-homer guy. It’s kind of like getting upset at the team for trading Jason Bay way back when; it seemed like a safe thing to do at the time.

Which is why I bring up this point for discussion: should we be curious about Jose Bautista, and how he went from a bench player with marginal power into a homerun slugger who makes opposing pitchers shake in their boots? Again — I’m not saying he’s done anything wrong. More to the point, whatever he has done to transform himself so dramatically, and so late in his career, could possibly be replicated by others — and therefore bears investigation. Wouldn’t it be awesome, for example, if Angel Pagan hit 50 homers next year?

Back Bark In The Park Tonight
Next Mets Game 156: Win Over Brewers