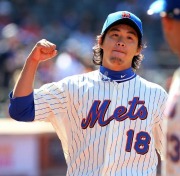 Back 2010 Analysis: Sean Green
Next Quick Primer on Wally Backman