Matt “The Stat” over at Cyclones Nation posted a scouting report on Kevin Mulvey and Philip Humber, which piqued my interest.

Take a look at Mulvey’s stats in AA Binghamton so far:

Now look at these: 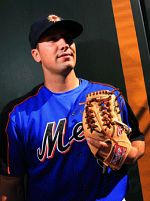 That second line is Mike Pelfrey at AA Binghamton in 2006. Other than the strikeout totals, the numbers are similar — which makes one wonder: 1. Does Mulvey project as better than a #5 starter? and 2. Might we see Mulvey sooner than anyone realized?

Mulvey doesn’t have the dominating, swing-and-miss stuff that Pelfrey had, but that might be to his advantage. While Pelfrey relied on his hard fastball to overpower immature hitters in college, A, and AA, that didn’t translate well in the bigs. Mulvey, on the other hand, relies more on command and guile, spotting a sinking fastball, curveball, slider, and change. Mulvey’s advanced and polished repertoire were the main reason the Mets were OK with sending Brian Bannister to Kansas City — he’s effectively a younger version of Bannister, with similar upside, yet nearly as close to MLB-readiness.

While Pelfrey relied on his sinking fastball 90-95% of the time in AA, Mulvey’s success has been the result of strong command and the ability to change speeds. One would guess that Mulvey’s approach would be more in line with what he’ll need to do at the Major League level, and thus his skills may very well be more translatable than Pelfrey’s were at the same point in time.

Who knows, we may see Kevin Mulvey getting a few spot starts this September — if not sooner.

Back Twins Killings Me
Next Series Preview: Mets vs. Athletics