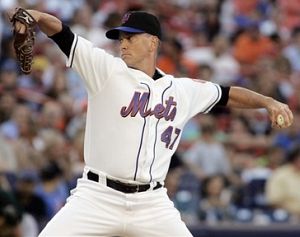 Wow … who were those masked men?

A gaggle of athletes that looked strikingly similar to the squad of April 2007 suited up in the Mets’ blue and orange for the first contest of a three-game set, and pounded the Oakland Athletics for nine runs on eleven hits, giving the Mets their second win within a week — quite an accomplishment for a team that had only won three times in the month of June.

The man in Tom Glavine’s uniform was stellar, consistently getting ahead of the patient A’s hitters, and shutting them down through eight innings — allowing only six hits, two walks, and one run. That one run was the result of a harmless solo shot by Shannon Stewart in the second.

In the half-frames faux-Glavine was not pitching, the superheroes in Mets costumes feasted on Lenny DiNardo’s fastballs, led by ultra-men wearing names such as Reyes, LoDuca, Green, Delgado, and Beltran on their backs. The “Green” guy had a 2-for-4 day, smashing a homerun to leftfield and a double to right, driving in three. He also scored two runs, as did the Beltran replacement, who continued his hot streak with two hits and two RBI including a homerun. The man in Delgado’s baggy uniform also went 2-for-4, with both a run and a run driven in. Even the Glavine guy got into the garish gorging of DiNardo, hitting safely twice in three trips with a double.

As if the offense weren’t impressive enough, the defense put on a delectable display, making the routine plays as well as the spectacular. For once, it was akin to observing a highlight tape from a full year of play — yet in reality it was only one game.

Savor it, folks … who knows when we’ll be treated to such tasteful theatrics again.

Orlando Hernandez goes against one of the Joes — either Blanton or Kennedy, no one’s quite sure — in a 7:10 PM start. Perhaps El Duque will wear a technicolor dreamcoat, and be followed onto the field by the same superheroes that smashed the A’s into submission on Friday night. It would sure make for a good show, and be worth the price of a ticket.

Back Be a Cyclones Blogger
Next We All Know Better