Busch Beer is Not Spiked 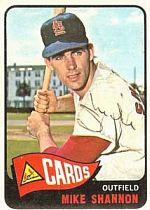 If you’ve never listened to Mike Shannon call a St. Louis Cardinals game, then put it on the list of “things to do before I die”. Unlike announcers who outwardly claim to be “professional”, and “never root for the home team”, yet are quite obviously homers, Shannon makes no bones about his Cardinal pride, and his passion imbues his broadcasts. His trademark is “Get up baby, get up, get up!” — verbally coaxing St. Louis-hit fly balls over the fence. If you hear him say “get up baby” when the ball is hit, rest assured it’s a homerun (I don’t think he’s missed one yet).

But this article has nothing to do with the St. Louis-born, former Cardinal ballplayer Shannon. Rather, it is an explanation for the name of Dan Moore’s excellent blog, Get Up, Baby!. To give you a comparison, it would be akin to a Yankee fan running a blog called “Holy Cow” in honor of Phil Rizzuto (don’t tell Chicago fans, they attribute that phrase to Harry Caray).

In any case, Dan was kind enough to share his thoughts regarding the Cardinals with us, the Pond Scum. Among other things, he confirmed that the beer in Busch Stadium is most likely not laced with any drug or other herbal remedy to make the St. Louis fans so gosh-darn nice.

1. With the St. Louis pitching staff in a shambles, is there anyone that Dave Duncan can turn into a legit MLB starter before Carpenter, Mulder, Looper, etc., return?

Kip Wells might have the best stuff on the staff, Carpenter excepted, and in his first start since doing a Pedro Martinez impression at the end of the Cardinals’ 14-inning win against the Royals he only gave up one run. Nobody’s ready to forgive him for how terrible he’s been this year, but his emergence would be much more important to the Cardinals than whatever Mike Maroth can do for them.

The other two pre-Maroth starters, Todd Wellemeyer and Brad Thompson, are probably better suited for the bullpen, but if Thompson were converted full time and managed to strike out another batter or so per nine innings he’d be a fine fourth starter.

2. What is the local fan response to the Cardinals’ season thus far? Concern? Anger? Not worried at all?

Anger is probably the closest of all those, but it’s really more disgust than anything else. The basic sentiment is the same one that was heard prior to the start of the 2006 season, when the Cardinals made no major moves and signed a guy (Juan Encarnacion) who has been very unpopular in St. Louis because he’s got a very distant personality and a style of play that doesn’t scream “grit and hustle” like Cardinals fans seem to like. This time, though, the Cardinals haven’t been able to hide behind a week division and a great start, so it’s all coming to the fore. People are still convinced the Cardinals are in the race, but unless they start making up some more ground I can’t imagine that will last much longer.

If they don’t contend till September this year, the Cardinals had better be ready to open up the pocketbook; people are very annoyed that the new ballpark hasn’t brought in any marquee free agents, and the Cardinals haven’t helped themselves in that regard by being outbid at the last minute on AJ Burnett and Jason Schmidt in back to back years (no matter how badly both signings have turned out.)

3. After last year’s NLCS, it appeared the old Cardinals-Mets rivalry from the 1980s might be revived. Is there any extra buzz / excitement in St. Louis when these two teams get together?

There definitely was a lot of buzz for the NLCS–lots of older fans passing the Pond Scum nickname down to a younger generation–but they just don’t play each other enough. It’s really a shame, because the Astros just aren’t as interesting as Hated Divisional Rivals. If they scheduled a few more Cards-Mets games in the regular season I think it could come back.

Heck, there’s enough resentment about the way your shortstop’s name seems to be Jose The Most Exciting Ballplayer in the League Reyes whenever Joe Morgan is doing a Mets game on ESPN to drive a rivalry by itself. So I hope it comes back.

4. Amidst all the injuries, is Albert Pujols pressing? Is he getting any pitches to hit?

He seemed to be lunging a lot early in the season, and chasing pitches he never used to chase, and combined with his bad spring training there was much weeping and gnashing of teeth about whether or not he was The Albert Pujols anymore. He’s started walking more and hitting for a better average as a result, and this month his power’s come back to Albert Pujols levels, so I’m no longer worried. There are too many other things about this team to worry about.

5. A bright spot is Chris Duncan — is he for real?

I’ve never been happier to be wrong; it looks like Duncan really is this good. I’ve been wary of him ever since a really great Spring Training almost got him on the opening day roster in 2006, because his career minor league slugging percentage is all of .412, but it seems like he’s one of those rare players that completely destroys their own minor league numbers. He had some weird knee problems (an infection) earlier this month, which put him into an extended slump, but he’s hit his way out of it of late. He’s now played 160 games in the majors, and he’s hit 37 home runs; he won’t hit .290 again like he did last year, but I think the 35 homer power is real.

6. Anthony Reyes seems to have a world of talent, but has yet to put it together. At age 25, it’s time for his career to turn a corner. Will it happen, and why or why not?

Oh, is this ever a can of worms among Cardinals fans. The short story of it is that Dave Duncan, our pitching coach, is convinced that no pitcher can be successful unless he throws down in the zone, preferably with a two-seam fastball. Anthony Reyes blew through the minor leagues throwing a four-seam fastball up in the zone, resulting in great command and high strikeout rates, whereupon Duncan made him start throwing a sinker that is truly awful.

But it’s more complicated than that. Reyes’s fastball sat around 92-94 in the minor leagues, and when he’s been successful he’s had the same fastball and he’s thrown it his way. (When he threw a one-hitter against the White Sox last year he hit 97 on the gun.) The problem is that his mechanics are not great, and sometimes his fastball sits in the low-90s, which makes him a lot more hittable no matter which way he’s throwing.

I think he’ll put it all together, because the Cardinals finally seem resigned to letting him throw high fastballs and his numbers in the minors are just too good, but eventually you have to worry about him needing a change of scenery if it doesn’t come together soon.

6. Any youngsters in the St. Louis organization that might come up and provide a spark?

The Cardinals finally have some good prospects, but most of them are a year away. The player closest to the majors is Rick Ankiel, who’s started to get some press now that he’s leading the PCL in home runs. The Cardinals need him much more as a pitcher, of course, but that ship has sailed. As a center fielder he could still help the Cardinals; he’s got what is arguably the best power in the minors, and (obviously) he has a ridiculously good throwing arm, but he’s hit inconsistently for average and he doesn’t draw a lot of walks.

The problem is that he’s out of options right now, as is everybody in the Cards’ outfield picture once Jim Edmonds comes off the DL. But he’s definitely ready to come up and be, say, Jeff Francoeur with more power (but a lot less projectability), so I have to imagine the Cardinals are shopping Encarnacion.

7. Interleague play is finally over. Thoughts?

While it’s happening I really enjoy interleague play, because I get to see guys like Vlad Guerrero in person and it breaks up some of the monotony that’s inevitable in a 162-game season. That said, I don’t know if it’s worth the way it seems to water down the all-star game and the World Series.

8. How is it that Cardinals fans are so darn classy and polite? Is it a culture thing, or are those Busch Stadium beers laced with zoloft?

I think it initially was a cultural thing, because the Midwest really is a nice place, but at this point it’s as much a self-fulfilling prophecy as anything else. The long-time Cardinals fans are very proud of the way St. Louis is viewed as a sports town, and they do a lot of policing to make sure nobody ruins it. I’m not a St. Louisan, myself (I live in Springfield, Illinois, ninety minutes away), so I’m not the best example–let’s just say I didn’t calmly applaud Endy Chavez’s game 7 catch–but a lot of them really do have the discipline to just applaud good baseball. It’s incredible.

Thanks again to Dan for his thoughts from a Redbirds fan’s perspective. Be sure to check out Get Up, Baby! for more analysis and opinion on the St. Louis Cardinals.

Back Vargas for Stairs? – Mailbag
Next Mets Game 75: Loss to Cardinals