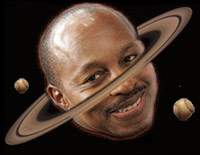 The awful losing streak that is hopefully behind the Mets seems to have done a number on Willie Randolph’s psyche. While we expect Willie to feed the media standard, ambiguous answers to the tough questions, to keep a positive light, and to fully support his struggling players, there’s a point where you wonder if Randolph actually believes the things he says.

For example, on Wednesday night, one of Willie’s comments regarding Scott Schoeneweis was

Clearly, Randolph is on his own planet, or in some kind of alternate reality, maybe a Twilight Zone

thing — you know, living in another dimension? Because the only thing Schoeneweis might have been popping were the spinal discs in his neck when he turned around to watch Brendan Ryan’s fly ball escape the playing field.

Randolph continued his madness on Wednesday night, assembling a lineup that included Damion Easley at second base against Cardinals righthander Anthony Reyes — leaving the switch-hitting Ruben Gotay to continue fermenting on the bench. We’re still waiting for an explanation on that one — after all, Willie is a “by the book” lefty vs. righty matchup guy, so why, if he was going to sit Jose Valentin, would he start the righty-hitting Easley in his place? Further, Easley’s hitting what? .250? And Gotay is around .300, right? And with typical groundball machine Tom Glavine on the mound, wouldn’t you rather have the slick-fielding Gotay on the right side helping cement-footed Carlos Delgado, rather than the range-challenged Easley?

As it turned out, Glavine had an uncharacterisitic outing, giving up twice as many flyballs as groundballs, and Easley didn’t have to move to field the three grounders that came his way. Further, Gotay’s offense was not needed. So in the end, Willie’s “gut” decision worked out just fine. Hopefully, Philadelphia is located on Planet Randolph, and things will continue to go Willie’s way.

Back Shea to Shea?
Next Keith Said What?