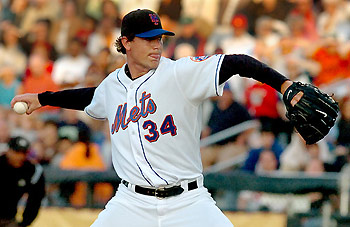 According to The New York Times and Metsmerized Online, Mike Pelfrey will be promoted from AAA New Orleans to start one of the games in Friday’s doubleheader in Philadelphia.

Interestingly, The Times also reports that the Mets braintrust has “internally discussed the idea of acquiring” Milton Bradley, who was DFA’d by the Oakland Athletics last Friday.

We won’t even qualify the Bradley rumor. As bad as the Mets offense has been, adding a human Molotov Cocktail to the clubhouse does not make good sense — especially considering Bradley’s lack of production recently and his frequent trips to the disabled list.

Pelfrey comes up to start one game, and likely will be on his way back to N’awlins before dawn on Saturday. Various reports claim that he’s regained the 95-97 MPH velocity he had in spring training, but has yet to command his secondary pitches.

After losing all five of his decisions and struggling with a 6.53 ERA in the Majors, Pelfrey has started eight times and posted a 2-2 record with a 3.38 ERA for the Zephyrs, allowing 43 hits and 15 walks in 43 innings. Those numbers may not seem terribly impressive, but consider that the PCL is generally considered to be a “hitter’s league”, with many small parks (he’s allowed four homers, pretty respectable for that league). To give you an idea, half the teams in the PCL are batting above .280 (including one team over .300), and most are averaging at least one homerun per game.

Whether it matters how well Pelfrey pitches is up for debate, as the word on the street is that he will start the nightcap opposite Cole Hamels, who is evolving into one of the top young lefties in the National League, and should be tough against an already struggling Mets offense. Assuming Pelfrey starts, will Willie support him with the “A” team, or are we more likely to see a lineup that includes Julio Franco at third, Damion Easley at short, and Ricky Ledee in the outfield? Not that there’s anything wrong with those players, but it will be interesting to see how Randolph sets the lineups.

Personally, I’m curious to see what Pelfrey has to offer — particularly his sinker. If he has command of the sinker, and it looks as devastating as it did in mid-March, he could be worth a look as a middle reliever this year. But that’s for a future article.

Scratch that — word now is that because of the rainout, Pelfrey won’t be starting on Friday. However, he most likely will be the man on Monday against the Rockies, when El Duque’s turn comes up again — assuming that Duque will not be pitching on three day’s rest. So … just kind of apply all the above toward Monday, or something.

Back How Axl Rose Can Help the Mets
Next Il Buono, Il Brutto, Il Cattivo