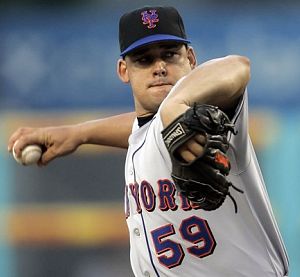 Boy do I feel dumb. Over the winter, I thought the Mets should have been after Tony Armas, Jr. for starting pitching depth instead of Chan Ho Park and Aaron Sele. Early in the March, I predicted that Alay Soler would be the surprise of spring training.

Fast forward to the end of June — Armas is hanging on by a thread and Soler has been released. There’s a reason my job is to blog while Omar’s staff gets paid to evaluate baseball talent.

Where will Soler go next? Hard to say, though you’d imagine the Phillies would be interested — they did sign Jose Mesa to a bonafide contract, after all. Perhaps Tampa Bay? In any case, it’s pretty safe to say he won’t be returning to the Mets’ organization … though, you never know.

Back Mets Game 78: Win Over Phillies
Next Backup Catching Option