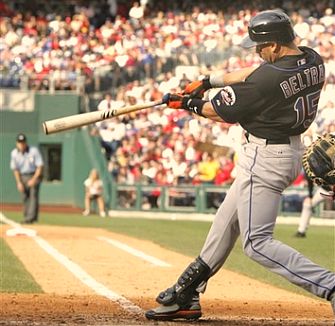 Wow. This was what the Mets were supposed to do to the unknowns in the St. Louis rotation. Well, at least their timing was right.

The New York Mets cruised to their third straight win over the previously second-place Philadelphia Phillies, getting a measure of revenge for the Phils’ sweep at Shea a few weeks back. As usual, the Mets got on the board first, via a two-run homer by Paul LoDuca and a solo blast by David Wright in the first inning off rookie J.A. Happ. Philadelphia fought back by scratching out two runs in the second, then tied the game on a homer by Ryan Howard, but the Mets bullpen held the fort from there on, shutting the Phillies out over the last four innings.

After Howard tied the game in the bottom of the fourth, the Mets answered immediately in the top of the fifth. Paul LoDuca drew a leadoff walk, then Carlos Beltran hit his first homer of the game to put the Mets up by two and send an unhappy Happ to the showers.

Beltran hit another homer, a solo shot, in the seventh to extend the insurance, and the Mets added two runs in the ninth to keep Billy Wagner out of the game.

Jorge Sosa was so-so, allowing three runs on three walks and four hits in five innings. He did well enough to keep the Mets in the game and earn his 7th win. He left the game after pulling his hamstring in the top of the sixth. You hate to see that happen to a pitcher, but on the other hand it is nice to see a guy busting it down the line — he successfully kept out of a double play on a sacrifice bunt attempt. Of course, it would have been prevented by a better bunt.

Beltran became the first player to hit two homers in back-to-back games since Carlos Beltran. Going 4-for-5 with 3 RBI and 3 runs, it’s safe to say he was the MVP of the game.

LoDuca also had a good day, going 2-for-4 with a walk, 2 RBI, and 3 runs scored. It’s easy to score hitting in front of an unconscious Beltran.

No one else in the lineup had a multiple-hit game, but every starter except for Carlos Gomez had at least one hit. Gomez did, however, reach base on a hit-by-pitch in the eigth.

Aaron Heilman also threw a scoreless inning, but the real hero was Pedro Feliciano (again), who pitched the last two innings and allowed only a hit. Feliciano faced the meat of the Philly order — namely Chase Utley and Ryan Howard — and set them down quietly. His slow curve was extra-sharp in this game.

Not sure whether he escaped, or if the Mets met the kidnappers’ demands, but Carlos Delgado returned to the team unscathed. He looked confused most of the game — which is to be expected considering what he must have went through over the last 24 hours — but did manage to eek out a bloop single to leftfield late in the game.

Not that anyone cares, but the Phillies are now in third place, six games behind.

Ollie has been scratched due to a stiff back. Mike Pelfrey will make the start this afternoon.

No word yet as to who comes off the roster to make room. Speculation is that Sosa’s tweaked hammy will put him on the DL — as he has only one more start before the All-Star break, and when he comes off, will be the fifth game after the break (which is his turn anyway).

Back Backup Catching Option
Next Mets Game 80: Loss to Phillies