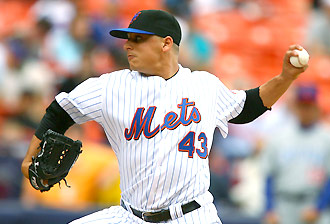 New Orleans Zephyrs starter Jason Vargas was held out of his Sunday start, most likely because he is the emergency fill-in should Oliver Perez still have back issues tomorrow.

It’s entirely possible, in fact, that the Mets hold out Perez regardless of how he feels, as a precautionary measure. His 7-6 record does not correlate with the way he’s been pitching this year — more times than not, he’s put out ace-like efforts. With the All-Star break looming, it would make good sense to give Ollie an extended break to let his back heal, and have him fresh and healthy for the second half.

At the same time, Tuesday is as good a time as any to see if Jason Vargas can help this club this year. He gave a solid if unspectacular effort in his one spot start in early May, going seven full innings and allowing six hits and no walks. Unfortunately, two of those hits were homeruns, and thus he gave up five runs. Still, he pitched fairly well, throwing lots of strikes, hitting spots, and changing speeds. Though perhaps not ready for regular duty in a Major League starting rotation, he is much more polished and composed than Mike Pelfrey — if less blessed with god-given talent.

Giving Pelfrey instead of Vargas the start yesterday reeked of trying to catch lightning in a bottle. Though Pelfrey was doing better in AAA than he did in the Majors, he wasn’t exactly lights-out, and based on his performance on Sunday, he’s still very raw. The electrifying sinker we saw in spring training returned, albeit only for an inning and a half. Though his slider looked better, he still isn’t changing speeds — and the fact that he uses the slider for strikes is a recipe for disaster (sorry, Jorge Sosa’s luck with that will run out soon as well). As a result, if he doesn’t have great command of the sinker, he’s doomed.

Vargas, on the other hand, has an average assortment of pitches — nothing particularly impressive, but nothing awful either. Unlike Pelfrey, no one will ever consider him a future staff ace, but he’s a tough competitor who does everything he can to win a game and rarely beats hiimself. In many ways, he’s a poor man’s Tom Glavine, in that he pitches to contact and does all the “other” things to help himself win — he fields well, hits well, keeps runners close, etc. Though he will get beat with the gopher ball — not a great thought considering he may be pitching at Coors Field — it’s generally because he’s not afraid to challenge hitters. Though he doesn’t have electrifying stuff, at this point in his career, he’s probably ahead of Pelfrey, and better equipped to keep the Mets in a ballgame.

Should Vargas get a start and pitch well, he could be considered as a spot starter / relief pitcher for a while — perhaps until Dave Williams comes back. It might be nice to have a lefty not named Schoeneweis to team up with Pedro Feliciano.

We may find out on Tuesday night.

Back Mets Game 80: Loss to Phillies
Next I Don’t Want to Pitch