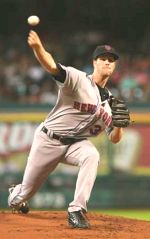 All season, the Mets have been in search of a “stopper” — a bonafide, ace-like starter who can put an end to losing streaks, and reverse negative momentum.

With his performance last night, John Maine put the mantle on his shoulders; he is unequivocally the Mets’ “stopper”.

Oh, and a note to anyone not wearing a Mets uniform: don’t get this guy mad.

The Mets — as they’ve been doing all year — got on the board right away with two runs in the first, thanks to a Jose Reyes triple and RBI singles by Ricky Ledee and Carlos Delgado. They tacked on three more as the game went on, and Maine took care of the rest, going 7 2/3 innings, allowing two walks, six hits, two runs, and struck out a career-high nine.

Though he has continually downplayed it, and insisted that he doesn’t think about it, you really must wonder if the snubbing of John Maine from the All-Star team had something to do with the dominating performance he displayed in this game.

More than likely, the selection of Roy Oswalt to replace John Smoltz for the All-Star team was the furthest thing from his mind. But that doesn’t make for a good story. So we’ll pretend.

John Maine, fired up about being passed over for the NL All-Star team, decided to show the fans and the National League what they’d be missing next Tuesday. And it was all the sweeter to do it in front of Roy Oswalt, who had just been named as the substitute for the injured John Smoltz.

Despite outpitching Oswalt in every category — and being fourth in the NL in ERA — Maine was passed over by Tony LaRussa twice, by the players, and by the person responsible for creating the “Final Vote” ballot for the fans. Maine’s response to this universal disrespect was to pitch his most intense and spectacular game of the year.

By the end of the third inning, Maine had already struck out seven batters, prompting SNY to pose the question of whether striking out 20 batters in a game was the most difficult thing to do in baseball. He was cruising, getting swings and misses, mis-hits, and harmless fly balls. Particularly inspiring was his ownership of the inside part of the plate, and the occasional “shaves” he gave batters on 0-2 counts. It’s been a long time since we’ve seen a Mets pitcher buzz up and in with purpose, gusto and bravado — a refreshing change from the typical “keep it outside” nibble and pick approach.

The defining moment of the game for Maine came in the sixth, when Craig Biggio led off with a basehit and Hunter Spence reached on routine fly that Ricky Ledee misplayed into a single. With none out, the meat of the Astros order was up — Lance Berkman, Carlos Lee, and Mark Loretta (the Killer L’s ?). Maine struck out Berkman and Lee and disposed of Loretta via an easy popup to end the threat and the inning.

He then breezed through the seventh without incident, but in the eighth, Biggio again led off with a hit — a ground-rule double. Maine stayed on to retire the next two batters, but then allowed a double to Lee that chased Biggio home and Maine to the dugout. Joe Smith came on and allowed a Texas Leaguer to right that scored Lee, and Pedro Feliciano was quickly brought in to strike out pinch-hitter Morgan Ensberg and finish the inning.

Billy Wagner came on in the ninth and made fairly quick work of the ‘stros in a non-save situation.

Ricky Ledee batted second in the lineup and played leftfield in the absence of Carlos Gomez (who is on the DL with a broken hand) and had a walk, two RBI singles, and a stolen base. While this was a wonderful performance from the perspective of the Mets fan, it was absolutely awful in that Willie Randolph will continue to believe in the Torre-like, nonsensical “hunches” that spill out of his brain. Yeah, Willie, that was a great hunch, you’re just absolutely brilliant. Now how many of your other “hunches” didn’t pan out before this one hit? His hunches are like the prophecies of Nostradamus. The famous “seer” made over 6000 predictions — so of course a dozen or so were bound to come true!

Ramon Castro continues to pound the ball when given an opportunity to play. He had three hits — all hard-hit balls — and is now batting nearly .300 for the year.

Carlos Delgado hit a single to right in the first, a 436-foot double off the centerfield wall in the third, a hard liner to center in the fifth, walked in the seventh, then fell behind 0-2 in the ninth before fouling off several pitches and eventually sending a solid line drive into center for his fourth hit of the game. We haven’t seen Delgado let the ball get this deep and trust his hands with this kind of confidence since 2006 — is the giant finally awake?

Did someone mention before the Colorado series that Shawn Green was getting good at-bats lately, and might break out of his slump? Oh, yeah, that was me. Since I made that point, he’s been 6-for-16 (.375) with three doubles. OK, so he’s not exactly on a “tear”, but it’s a pretty nice clip.

And while we’re speaking of good at-bats, Carlos Beltran hadn’t been getting many lately — it seemed as though he’d grounded out to first base about a hundred times in the last four games. He finally went the other way with one, and wow, it went over the leftfield fence. Huh.

Magically, John Maine began to tire immediately after pitch number 99. It would be nice if pitchers would be pushed toward 120 – 130 tosses every once in a while, so that they’d be in shape to continue throwing with effectiveness beyond the century mark when necessary and appropriate.

Many thanks to the SNY camera crew for showing us the bare feet of Keith Hernandez. Good thing Smell-O-Vision never took off.

Why is Jose Valentin still in the game in the bottom of the ninth, with a four-run lead? There’s this kid named Gotay who plays the same position — some think with more effectiveness — who can give Valentin’s cranky knee a rest in the late innings.

Mike Pelfrey gets a second chance in his second go-around with the big club, as the Astros send the immortal Wandy Rodriguez to the mound in another 8:05 PM EST start. There’s an outside shot we’ll see Sandy Alomar, Jr. catch, as he was Pelfrey’s caddy in the minors.

Back Inside Look: Houston Astros
Next 5 Hates for July 1-6