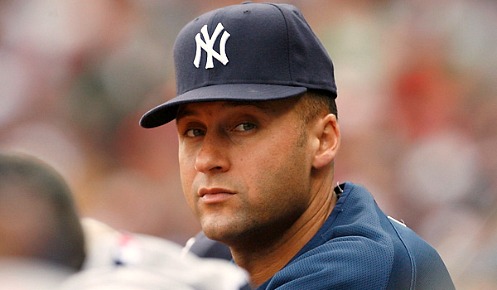 After Derek Jeter reportedly turned down a 3-year, $45M contract offer, the Yankees have told their Captain to shop around. Further, the Bronx Bombers have elected to NOT offer Jeter arbitration, so if another team signs the shortstop, they will not surrender a draft pick.

Assuming that Jeter actually DOES “play the field”, would the Mets consider tendering a contract offer?

For one, it would be the most devastating blow to the Yankees and Yankee fans in the history of Yankeedom. That on its own is worth $50M+ over three years. Imagine the fun you’d have needling your fellow Yankee-loving co-workers at the water cooler.

Second, the Mets are going nowhere in 2011 and will be desperate to sell tickets. Signing Jeter would provide an immediate, substantial boost in season-ticket sales from former Yankee fans. I know, it would stink to have to sit next to Yankee fans at a Mets game, but you won’t be visiting the Ballpark at Shea Bridge more than once a year until at least 2013.

Third, there is the 3000-hit milestone. Watching Derek Jeter collect his 3000th hit as a Met would be so incredibly delicious for us fans, and so incredibly profitable for the Wilpons, that it cannot be ignored. The moment itself has enough value, but consider the that the moment will be repeated on highlight reels for the next 50 years. Yum.

Finally, there is the clubhouse presence / leadership / mentor / grit factor. The Mets are hell-bent on changing the attitude and perception of this ballclub; adding perennial winner Derek Jeter to the mix would be an instantaneous upgrade in those areas and would provide ten times the credibility Pedro Martinez brought in the winter of 2004.

It’s a tremendous longshot, I know — but not outside the realm of possibility, if the Wilpons are game. It’s not as crazy as it sounds; the Yankees have allowed Derek Jeter to roam the market, and there are a handful of teams that make sense: the Red Sox, Dodgers, Angels, Cubs, and Mets. All five of those teams can afford to pay him, would love to mess with the Yankee Tradition, offer a big-city stage, and would benefit from his presence. The Mets would appear to be the most viable of the five, considering that Jeter wouldn’t have to move, would convert tens of thousands of existing fans to the orange and blue very easily, and would remain on center stage in the media capital of the world.

I can tell you’re still uncomfortable with such a notion, and wondering how Jeter would fit in. Well, there are a few options. Jeter could move to 2B, replacing Luis Castillo — you’d like that, no? He could also move to short, allowing the Mets to deal Jose Reyes for big-time prospects (Justin Upton?). Or maybe Jeter could play 3B, and David Wright could move to 2B or a corner outfield spot. Let’s put it this way: having Jeter on the roster would be a pleasant problem, and the Mets would figure out how to make it work; don’t worry about the details until you need to.

Most likely, the Yankees would double their contract offer if the Mets made a bid, making this entire story a moot point. But if that’s how it played out, at least we’d revel in the joy of screwing the Evil Empire.

Do the Mets have the chutzpah to make an offer? Would you welcome Derek Jeter with open arms? Heck, he couldn’t be any worse than Tom Glavine. Post your feelings in the comments.

Back Mets Tickets on Amazon
Next Thanksgivings Past