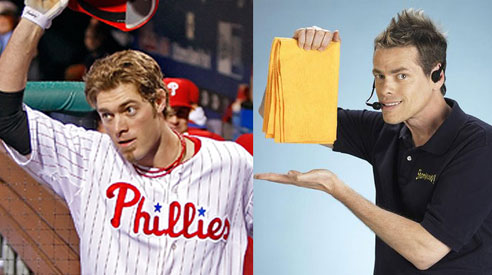 The headline is not a misprint; the Washington Nationals have indeed signed outfielder Jayson Werth.

I thought they were trying to reduce the deficit in Washington.

My SweetSpot buddy Bill Baer put it this way, which only fans of CSI: Miami can appreciate:

In all seriousness, this is a shocking development, changing the winter meetings dramatically. For example, within hours of the announcement, the Red Sox re-doubled on their efforts to sign and acquire Adrian Gonzalez. The signing also jacks up the price for Carl Crawford, and confirms the notion that the Phillies need to find a way to replace Werth’s bat in the lineup. Yes, they have Domonic Brown penciled in to RF, but can they count on Raul Ibanez to be productive again? Or will they try to find another corner outfielder? Similarly, with Werth off the market, will the Red Sox set their sights on Crawford, or are they content with what they have?

Could the Werth signing make Carlos Beltran and/or Angel Pagan more valuable as trading chips, to teams who were considering Werth?

Perhaps more intriguing, what the heck are the Nationals thinking, and what shocking move will they make next? Are they going to make a serious effort to improve their pitching staff, and add more “win now” – type players?

If nothing else, this week could be one of the more active and interesting winter meetings in several years.

Back Check That: Adrian Gonzalez IS Going to Boston
Next Non-Tender Highlights