How About Jose Canseco? 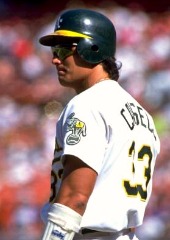 Many Mets fans are lamenting the lack of a big-time player acquisition this winter, which is due to the Mets’ limited finances. The team just doesn’t have the money nor the wherewithal to bring in someone who can make an impact in 2011.

Desperate times call for desperate measures, and the Mets need to think out of the box. How about signing Jose Canseco?

– Jose was a central figure in Sandy Alderson’s success as a GM in Oakland
– Canseco is one of the few available hitters who can make Citi Field’s dimensions seem small
– His presence will sell tickets
– He’ll come cheap; likely he’ll play for the MLB minimum

Of course, Jose has his negatives — age being the most concerning. But advanced age didn’t prevent the Mets from hiring Sandy Alderson and Terry Collins, did it? Both of those men were hired because they had experience, and previous success at the MLB level — two things that Jose also has. And before you say it’s crazy to sign a 46-year-old free agent, remember the Mets did exactly that on this day in 2005, when the Mets inked Julio Franco to a 2-year, $2.2M contract. Hopefully I don’t need to remind you that the last time the Mets made it to the postseason was 2006, with Franco appearing in 90 games as one of their top players off the bench and a calming influence in the clubhouse.

There is some concern as to whether Jose can still play the field (some may argue he was never able to play the field), but I’m not suggesting that the Mets make him an everyday player; and can he really be much worse in a corner OF position than Fernando Tatis?

As for the steroid thing — which I’m sure has been on your mind since reading the headline of this post — perhaps you are not aware that Jose Canseco stopped taking steroids in 2008, and has been clean ever since. Of course we don’t know for certain whether he can still swing a bat with as much power as he had when he was juiced, but what is the harm in giving him a tryout to find out? If it turns out he can still hit, sign him to a minor-league contract, invite him to spring training, and see what happens. At worst, he gets cut. At best, the Mets get a very cheap, big-name slugger who will put fannies in the seats.

Is there a bigger name, or a bigger bat, currently available for a lower cost?