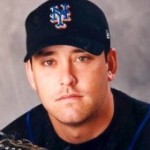 According to ESPN, the Red Sox have reached an agreement with free agent and former Met reliever Dan Wheeler.

OK, it’s been over six years since Wheeler was a Met, but the stupidity in cutting him loose back then still stings me — not because I’m looking at it in hindsight, but because it seemed really, really dumb at the time.

To refresh your memory, it was late August of 2004 and the Mets were on their way to another September filled with meaningless games. The team was closer to last place than first; in fourth place, 12 behind the first-place Braves and six ahead of the last-place Expos. This was the year that team-player Mike Piazza was moved to first base without his permission; Jose Reyes was forced to run like an awkward chicken and moved to 2B to make room for Japanese superstar Kaz Matsui; Jason Phillips was supposed to be better than what we hope for Josh Thole ’11; Mike Cameron hit the lightest 30 homers in baseball history; the one-two punch of Karim Garcia and Shane Spencer was platooning in left field (and in pub parking lots); and Scott Kazmir was traded for a .500 pitcher with elbow problems who Rick Peterson could “fix” in “ten minutes”. On the bright side, it was also the year that David Wright made his debut — though, he was deemed too young to handle the “pressure” of batting higher than sixth in the lineup (it was fine to bat Gerald “Ice” Williams leadoff and fill the cleanup spot with Richard Hidalgo — they were “experienced” after all).

By mid-August, the lack talent on the field and intelligence at all levels of management was taking its toll. The firing of Art Howe would soon be announced — though he’d remain in his position of manager until the end of the year — and interim GM-turned-GM Jim Duquette had his feet to the coals as well. The bullpen was wearing down, and stocked with ageless wonders such as Mike Stanton, John Franco, David Weathers, and comeback kid Ricky Bottalico. Here and there, though, the Mets were auditioning some young arms, such as Matt Ginter, Orber Moreno, Pedro Feliciano, Heath Bell, and Dan Wheeler. Ginter was kind of like Dillon Gee, a longtime minor leaguer with so-so stuff but finding ways to win in a starting role. Moreno looked pretty impressive, and though both Bell and Wheeler struggled a bit, they both showed good velocity and fearlessness. I distinctly remember Wheeler being something of a protege under David Weathers, and seeing many similarities between the two. (In hindsight, Wheeler probably should have chosen John Franco as his guru, since Franco and Al Leiter seemed to be making player personnel decisions that year.) Another miserable season was winding down, but to me, the quartet of Moreno, Feliciano, Bell, and Wheeler suggested that the Mets might at least have a decent bullpen to look forward to in 2005.

But then in late August, the team DFA’d Wheeler to make room on the roster for Jae Seo — who showed some promise as a rookie in 2003 but found his way back to AAA after his velocity dropped in ’04 (he reportedly explained to the Mets that he purposely pitched at a decreased velocity in the early innings of starts, so as to have enough strength to get past the fifth inning). Mind you, I didn’t necessarily oppose the idea of promoting Seo, who had seemed to work things out in Norfolk. What didn’t make sense was adding him at the expense of Wheeler, who had been quickly proving himself to be a valuable asset for his hard, 94-MPH sinker, ability to throw strikes, and willingness to take the ball in any situation. Just a few of the players the Mets could have DFA’d instead included Bartolome Fortunato and Mike DeJean, neither of whom were pitching well nor had a future with the club, or any of a number of position players (Ice Williams is one in particular who stood out; Wilson Delgado another, though they needed him to play shortstop at the time).

Ah, those were the days … lucky for us, a new regime came into power a few months later — one that promised not to make bad decisions like that anymore, and would build the team around youth for long-term success.

Back Christmas Gift for the Irish Baseball Fan
Next Emerald Diamond: Try Before You Buy