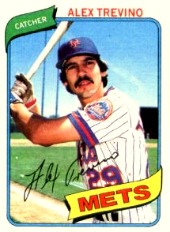 If you missed yesterday’s post on cancer survivor Jackson Todd, then you may not understand what’s going on here. Each day, we will honor a random former Met who wore the uniform number that correlates with the Days Until Pitchers And Catchers Report (DUPACR) to Port St. Lucie. So yesterday, it was 30 days until, and today, it’s 29 days until, so we’ll focus on a former Met who wore #29. Get it? And just so you know, this series was inspired by the book

It would be easy to choose Frank Viola for #29. “Sweet Music” comprised one-fifth of what should have been the greatest starting rotation in Mets history — and it could be argued, was exactly that on paper. The Mets entered the 1990 season with a rotation that consisted of Viola, Dwight Gooden, David Cone, Ron Darling, and Sid Fernandez — with Bobby Ojeda as the sixth / swing man. Wow. As it turned out, that team finished second to the Pirates (!) with a 91-71 record. Ouch.

But this isn’t about Frank Viola nor the underachieving ’90 club. It’s about Alex Trevino. Who?

There were many choices from the pool of Mets who wore #29. Viola, of course, but also Dave Magadan, Steve Trachsel, Frank Tanana, Mickey Lolich, Ken Singleton, Robert Person, Hank Webb, Octavio Dotel, Jorge Sosa, Masato Yoshii, and Rich Chiles, among others. I almost decided to go with Chiles, who represented potential unfulfilled, and toyed with the idea of Lolich, for no other reason than he owned a donut shop and looked like he did.

But in the end, I chose Trevino, mainly for personal reasons. John Stearns was my favorite Met in the late 70s, and he, Jerry Grote, and Thurman Munson were the three reasons I decided I’d be a catcher at age 8. So I was very “in tune” with anyone who squatted behind the plate at that time, and when Stearns went down with an injury (as he so often did), Trevino was the guy who took over as the regular backstop. I distinctly remember Ralph Kiner and Bob Murphy raving about Trevino’s defensive skills, to the point where it upset me — particularly when the Mets started experimenting with Stearns at different positions, such as 1B, 3B, and the outfield. To me, Stearns was the Mets catcher, and this Trevino guy had no business encroaching on his turf — even if he did have a rifle for an arm (and he did).

With Stearns’ hard play constantly resulting in injury, we saw more and more of Trevino, and it appeared that he’d eventually be the #1 catcher regardless of Stearns. In addition to remaining healthy, Trevino was — as hard as it was for me to admit — a better defensive catcher than Stearns, and he hit in the .250-.260 range, which was better than most backstops back in the day. However, Trevino didn’t hit for much power — he holds the Mets record for most at-bats without a homerun (733) — and he rarely took a walk, so Sandy Alderson wouldn’t care much for him. But back then, a catcher with an arm like his and the ability to hit .250 was coveted, and as a result he was the key player in the deal with the Reds that brought back George Foster; Trevino was seen as the heir apparent to Johnny Bench. As you can probably figure out, things didn’t quite work out that way; Trevino’s defensive prowess wasn’t enough to make up for his lack of punch, and after a disappointing 1983 season in Cincinnati, he spent the rest of his career as a backup, retiring in 1990 after 13 seasons in the bigs.