No, I didn’t forget to finish the headline … though, it could’ve gone “Might Emaus Win the 2B Job?”.

Instead, I’m going to tab rookie Brad Emaus with a nickname, right here, and right now: “Might Emaus” … as in, “Mighty Mouse”.

Baseball needs more nicknames these days, and the moniker fits. After all, Emaus is similarly well-muscled and has been described as “… short and kind of squat…” by one onlooker, which is sort of how one could describe Mighty Mouse. And, Emaus did kind of come out of nowhere / drop out of the sky; if he “flies in” to take the second base job, it will be due to a heroic effort. I’m not sure if he has X-ray vision or telekinetic skills, nor if he has a girlfriend named Mitzi, but I bet he can beat up Oil Can Harry Boyd. 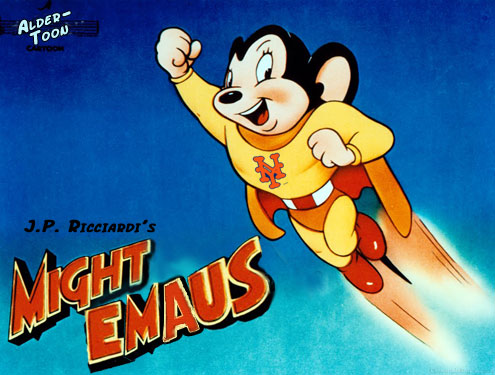