Bryce To Bat For Nats 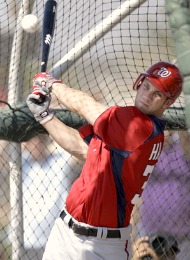 According to Nationals manager Jim Riggleman, phenom Bryce Harper will bat in this afternoon’s exhibition game against the Mets.

This is exciting, considering that Harper is the most-hyped teenage hitter since maybe Alex Rodriguez. All reports suggest that the kid has no chance of making the Nats’ opening day roster, but hey, you never know.

I remember reading about Bryce Harper being a “hired gun” or “ringer” for travel squads almost five years ago in a New York Times article; 13U and 14U amateur baseball teams going to major tournaments would pay his way to be their DH. At the time I thought, “huh, I wonder if this kid will still be this good by the time he can sign a pro contract? Will everyone else catch up? Will he burn out by then?”.

Clearly, he has not.

One thing that saddens me, of course, is that they’ve already moved Harper from behind the plate to the outfield. It’s amazing that whenever a young catcher shows the slightest bit of offensive potential, they move him to another position for fear that he’ll lose his right arm or break his neck from the demands of the position. Yet at the same time, there is constant shortage of catchers with offensive skills — and people can’t seem to figure out why. Duh!

There may never again be a time like the 1970s and early 80s, when MLB had a bunch of strong hitting catchers — like Johnny Bench, Carlton Fisk, Thurman Munson, Ted Simmons, Gary Carter, Darrell Porter, Butch Wynegar, Gene Tenace, Manny Sanguillen, Bill Freehan, Lance Parrish, and others. Sure, there were still the light-hitting Jim Sundbergs, Glenn Borgmanns, and Steve Yeagers, but it seemed as though catchers who could hit remained behind the dish. The first young catcher I remember being moved by the logic of “extending his career” was Todd Zeile. I’m sure there were others before him, but for whatever reason his case sticks out. Zeile did go on to have a fairly successful, 16-year career, so I guess the move made sense. But Fisk, Simmons, and Carter (for example) all played even longer, despite spending most of their time in MLB as catchers. Yes, I know that Fisk and Simmons were used in the DH role frequently as they aged but the point is, staying behind the plate for most of their career didn’t prevent them from enjoying many years of MLB service. And other than Ray Fosse, I can’t think of one offensively gifted catcher who had his career cut short or hitting severely affected by donning the tools of ignorance. Further, in today’s game, where most of players slide around the catcher like sissies rather than try to upend the backstop in a play at the plate, there is less chance than ever of a catchers sustaining a major, career-threatening injury.

OK I’m off my soapbox. Enjoy watching a Bryce Harper at-bat today. Let’s hope he doesn’t injure himself running into an outfield wall or by having a fly ball bounce off his head.

Back Mets ST Game 1 vs. Braves: Quick Notes
Next Ollie: A Year Ago