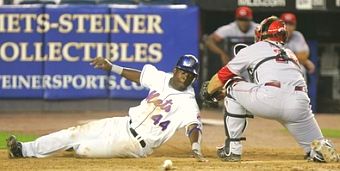 It was a good way to start off the second half of the season — in many respects.

First of all, Orlando Hernandez pitched a masterful ballgame, going six complete innings and allowing only two runs on three hits and three walks, while striking out seven. Truth is, the Reds would not have scored at all if El Duque had not suddenly and inexplicably lost the strike zone for about a ten-minute period.

After Jose Reyes and Ruben Gotay hit back-to-back homeruns to lead off the bottom half of the first and put the Mets ahead 2-zip, El Duque walked Adam Dunn, struck out Edwin Encarnacion, allowed a single to Alex Gonzalez, then struck out catcher David Ross and appeared to be out of the inning as opposing pitcher Bronson Arroyo (batting .081) stepped to the plate. However, he walked Arroyo to load the bases, and then fell behind 2-0 to Scott Hatteberg as his fastball continued to veer far from the strike zone. Eventually, Hatteberg drove a liner to right that Shawn Green dove for, but could not come up with, driving in Dunn and Gonzalez and sending Arroyo to third. Hernandez regrouped to get Ryan Freel to popup to David Wright to end the inning, and then retired 12 of the next 13 Cincinnati batters — with only Ken Griffey reaching base on a walk in the third.

The game remained tied at two until the bottom of the fifth. Lastings Milledge — promoted earlier in the day — led off the inning with a sharp basehit to right. El Duque could not get the sacrifice down and struck out, and Jose Reyes lined out to left. With two outs and Milledge still on first base, Ruben Gotay stepped to the plate. Gotay worked the count to 2-2, fouled off a few pitches, and then hit a low liner to shallow center while Milledge was in motion. Centerfielder Ryan Freel made a valiant stab, but could not catch the ball on a fly and it rolled under his body. Milledge never broke stride rounding second, and was waved around third as Freel fumbled for the ball. The hustling Lastings and the ball reached the plate at the same time, but Milledge made a leaping slide/dive over and around catcher David Ross, and slapped the plate just before the tag to score the go-ahead — and eventually, winning — run.

Joe Smith pitched a perfect seventh, Pedro Feliciano threw a seven-pitch, perfect eighth, and Billy Wagner closed out the ninth to earn his 18th save.

In case you missed it:

But nothing else of note occurred yesterday.

Ruben Gotay — playing only because of Valentin’s finger injury — went 2-for-4 with a homerun and two RBI, and is now hitting over .340. That said, odds are 5-to-1 he starts in Friday night’s game.

There were two balls that Shawn Green didn’t catch, but Carlos Gomez might have. In the first, Griffey lined the ball into right-center, and Green got a good jump, dove, but could only trap the ball and smother it, holding Griffey to a single. In truth, it was probably a ball Carlos Beltran should have had — but since the Cameron incident, he’s pretty shy around hard-charging rightfielders. In the second inning, with two out and the bases loaded, Hatteberg’s line drive to right was just out of the reach of an again-diving Green. He didn’t get a great jump on the ball — its low altitude seemed to throw him off at first, and by the time he realized he might be able to snare it, it was a second too late. Granted, El Duque shouldn’t have been that far in the inning — he walked the pitcher preceding Hatteberg — but the ball might have been catchable by a young and fleet Gomez (or Endy Chavez). If Green doesn’t start hitting soon, he could find himself on the bench if and when Moises Alou ever reappears.

In the second inning, El Duque hit a single up the middle, then stole second without drawing a throw, and found his way to third on a wild pitch. He was stranded there when Jose Reyes was picked off first by Bronson Arroyo.

John Maine goes for his eleventh win of the season against Matt Belisle in another 7:10 PM start. Rickey Henderson says that Rickey will be in New York and in uniform and right by Will-o’s side.

Back The Blog Red Machine
Next How Rickey Can Help