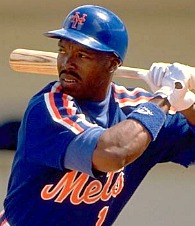 Anyway I thought it might be fun to take a look back at a random Mets spring training of the past. In this case, I chose 1991.

What was happening in Port St. Lucie? For starters, Sid Fernandez reported to camp overweight, Mackey Sasser assured everyone that his throwing “tick” was no longer a problem, Howard Johnson was the team’s starting shortstop (and Kevin Elster wasn’t happy about it), Hubie Brooks was back in the orange and blue to replace the hole in the middle of the lineup left by free agent Darryl Strawberry, and Vince Coleman was ready for the challenge of playing centerfield in New York. From The New York Times:

“I’m excited,” said Coleman. “And I’m in the best shape of my career.”

Coleman, the man who has led the National League in stolen bases for each of the last six seasons, said he did not consider his move from left field to center a radical experiment and added that he did not believe the extra drain on his legs would affect his ability to steal bases.

“I accept all challenges,” said Coleman, who left the Cardinals to sign with the Mets as a free agent. “I played center in college and the minors. And so I consider it a return to the position at which I was first introduced to the game of baseball. And I can’t say it’ll take a toll on my steals.”

Interestingly, one of the top stories on March 3rd in The New York Times had the headline “A Little Sympathy for the Yankees“. Stump Merrill was the manager, Roberto Kelly was “looking like a fixture”, and Yankees fans were disgusted with their team’s decade of despair. How bad were things in the Bronx back then? Here is a quote from the last paragraph of that article:

Instead of thinking about them as a loony bin, a legal case, a running joke, we should think of the Yankees as an expansion team, dropped into our laps, a gift from above, in beautiful pinstripes, no less.

Ah, those were the days!

Back Around the Blogs
Next Ollie Gets Another Life