Many actions — and inactions — contributed to the Mets’ victory last night. Some were obvious, some not so obvious. Let’s take a look at two at-bats in particular to demonstrate how some of the less noticeable details can affect the momentum of a ballgame.

Cole Hamels struggled mightily in last night’s ballgame, and it was only a matter of time before the Mets got to him. But there were a few little things that happened during that third-inning offensive explosion that contributed significantly to the 6-run outburst.

First, there was the pitch sequence to Ike Davis. Hamels fell behind the count 2-1, even though Pitch F/X saw three strikes thrown. Pitch four resulted in an RBI single up the middle. If Hamels gets at least one of those pitches called “correctly” (if you trust Pitch F/X technology), that at-bat changes completely: in a 1-2 count, Davis has a different mindset and approach — as does Hamels. Perhaps Davis gets a cutter outside the strike zone that he waves at for strike three. Maybe he doesn’t even get that far — perhaps the count begins 0-2 and strikes out on pitch three, whatever it winds up being. That would be the second out of the inning, and maybe the Mets score only 3 that inning instead of 6, and there is a different attitude by the Phillies down only three instead of six.

Earlier in that inning, David Wright struck a single to score Jose Reyes and place Angel Pagan on third. But Pagan really should have never been on third — a decent throw would have had him out easily. While Pagan was steaming around second without hesitation, Raul Ibanez was charging hard on the broken-bat, shallow blooper into left. Had Ibanez come up throwing to third immediately, Pagan would’ve been out by a mile. Instead, Ibanez picked up the ball, seemed confused, and even after realizing Pagan was advancing to third, he still probably had time to regroup and throw him out — Ibanez was only about 100 feet away from third base. But for whatever reason, Ibanez threw to second. Bad, bad baseball.

Check out these still shots illegally harvested without permission from MLB.com to see how easily Ibanez could have nailed Pagan (and also see how fast Angel is!). 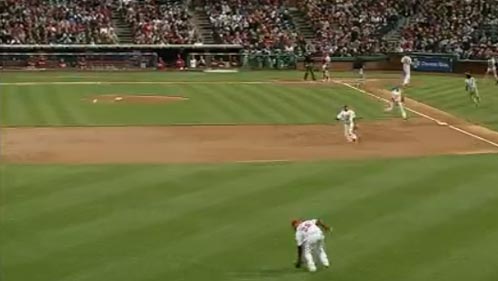 Ibanez has picked the ball cleanly, Pagan is only halfway to third base

Again, this is a “little thing” that doesn’t come up in the boxscore, and may or may not factor prominently into advanced fielding statistics. But if Ibanez throws to third and Pagan is tagged out, that’s out number two in the inning and both the complexion of the inning and the game change.

There were several other “little things” that happened during the course of this particular game — and that happen in all games — that directly or indirectly impact the pace, momentum, and final score of a baseball game. Unfortunately, we don’t always get to see this minute details from the centerfield camera; many of these things can only be seen when sitting in the ballpark and watching with a keen eye. Noticing these innocuous details is part of what can make the game of baseball infinitely interesting.

Back Mets – Phillies Preview on Crashburn Alley
Next Mets Game 5: Loss to Phillies