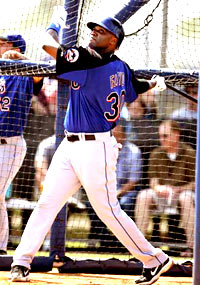 After getting above the Mendoza line a few days ago, it seemed as though Cliff Floyd was finally shaking his season-long slump. However, he had the unfortunate luck to run into a tough lefty, Mark Mulder, on a night that Mulder was at his toughest.

Is there reason for concern?

Metstradamus suggests that “He’s hurtin’. Don’t know what…don’t know how…but something about him is not correct. You can only put your car through so much before it stops running. And Cliffy it seems has taken his Dodge Dart of a body on too many cross country trips, which have included a few ill advised spinouts on major highways, and too many sideswipes on cross streets.”

He may be on to something there … Cliff Floyd isn’t getting any younger, and with all the injuries suffered throughout his career, his body has taken more of a toll than many other 33-year-olds. As Metstradamus says, something about him is not correct.

However, I’m not sure it’s his physical health (or breakdown). Actually, Cliffy’s problem looks not to be weakness or lack of bat speed, but the exact opposite: he’s too quick with his hands. He has a slight uppercut on most swings, and he’s topping the ball often and grounding out to the right side of the infield. That’s an indication of the bat coming through too early. Ted Williams was the first to point it out in his Science of Hitting, and it’s fairly logical. Picture the bat on an upswing, while the pitch is coming in on a downward plane: if the bat is too far ahead, it will miss or top the ball.

Cliffy hit a bunch of dingers last year, and he was never really a homerun hitter before. I think he might have learned “how” to hit them — by being a little bit ahead of the pitch and jerking the ball into the right field stands. However, he seems to be taking that approach far too often, to the point where perhaps it has become a habit.

Take a look at Floyd’s stats before he came to the Mets and you’ll see a guy who — outside of a 31-homer campaign in 2001 — hit for a near .300 average with tons of doubles (40+ a year), but rarely more than 20 HRs. After arriving in New York, however, the average has dropped considerably, the doubles have disappeared, and the homeruns were about the same until shooting up dramatically last year. Shea Stadium is not a hitter’s park by any means, but it shouldn’t have a drastic effect on the ability to hit doubles, and it shouldn’t allow a hitter to suddenly double his home run numbers.

So my best guess is that Cliff Floyd has changed his approach, and possibly his swing, and transformed himself from a high-average, doubles hitter, to a not-so-high-average, homerun hitter. Unfortunately, he hasn’t been hitting too many homeruns this year. And to make matters worse, it appears that every scout on the planet has taken note of Floyd’s pull-for-the-fences approach, as infielders are shifting to the right side when he’s up. In addition, many pitchers are feeding him inside pitches that are too far in to be dangerous, which Cliffy is pulling foul, then coming back with off-speed pitches on the outside part of the plate, which results in him reaching and either missing, popping up, or grounding out meekly. I’m not sure how many times Cliff and hitting coach Rick Down have to see this elementary strategy before they change something in Cliff’s approach.

The solution is fairly simple: trust the hands, wait back, and concentrate on hitting the ball to left field for a while. Of course, it’s easy to say, but hard to do. Much of the issue is the inside-pitch strategy that has been bestowed upon Mr. Floyd. The pitches look good coming in, and the natural reaction is to jump on them. Maybe Cliff can move off the plate a few inches, and concentrate on forcing the ball to left field with an inside-out swing. It’s not a swing he should always use, but it may help him get out of his current funk. The idea is that if he is looking to go the other way, he won’t be as prone to jumping too quickly on an inside fastball, and will wait longer on those (and all) pitches. That will give him a better read on pitch location, and hopefully get him swinging at more strikes.

After taking that approach for a couple weeks, and slashing some balls the opposite way, word will go around the NL pretty quickly that the “old way” to get Floyd out is no longer working, and maybe infielders and pitchers will attack him more straight up again.