10 Players the Mets Won’t Get

The trading deadline is nearing quickly, and though there’s plenty of hot air circulating, very little action is being made. The only significant deal thus far sent Jason Kendall to the Cubs — a nice deal, but only barely newsworthy to folks outside of Chicago. Yet, the rumors keep swirling, with over a dozen big names being bandied about on an hourly basis.

Here are ten players mentioned in rumors, who will NOT be traded to the Mets.

1. Roy Oswalt
It’s funny … everyone OUTSIDE of Houston thinks Oswalt is on the block, yet nothing could be further from the truth. Drayton McLane locked up Oswalt at a bargain price for the long term for a good reason: he’s the type of pitcher you can build a franchise around. He’s not going now, not next year, and likely not anytime thereafter.

Yes, Omar Minaya drafted him, and put him in the heat of a pennant race not long after. And yes, Minaya would love to have him now. However, Minaya is not paying the price the Nationals are asking — two top pitching prospects and one top position player (i.e. Humber + Pelfrey + Milledge).

It would be nice to see Lidge setting up Wagner again — just like old times. However, Astros owner Drayton McLane has already said Lidge isn’t going anywhere. Translation: Lidge is available, but for an exorbitant price. More realistic: the return of Dan Wheeler. 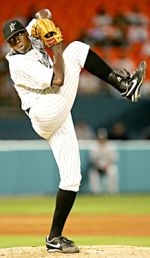 You can’t call it a time of trade rumors until there’s talk of D-Train going to the Mets. It ain’t happenin’. The Marlins still regard Willis highly, but his recent performance does not match his perceived value. In addition, there are whispers that his unorthodox delivery is finally catching up to him, and tearing up his arm. The Mets won’t gamble on him.

GM Wayne Krivsky is on the hot seat for two reasons: the Reds stink this year, and the awful lopsided deal that sent Austin Kearns and Felipe Lopez to the Nationals looks worse every day. Krivsky has his entire roster for sale, but can’t afford to get fleeced again. If he trades a starting player — particularly a star such as Griffey — he has to get significant value in return. The Mets are not willing to pay the price necessary to pry away Griffey, nor Adam Dunn for that matter. Even if they were, it wouldn’t make sense — the Mets are already lefty-heavy in their lineup, and are in the market for a righthanded hitter. And if they had the choice, they’d take Griffey over Dunn. The image of Dunn in left and Shawn Green in right is too difficult to stomach.

Like the aforementioned Krivsky, Rangers GM Jon Daniels has some ‘splainin’ to do — specifically in regard to the trade that sent away Adrian Gonzalez and Chris Young in return for Adam Eaton and Akinori Otsuka. That said, Daniels will be looking to be on the correct side of a lopsided deal — that means a severe overpayment for Eric Gagne. The Mets aren’t willing to trade top prospects for a guy whose arm may fall off before September.

Sosa will likely come cheaper than Gagne, but still won’t be worth any player in the Mets organization with a heartbeat. Remember, the guy would have to play the outfield in the NL. While the Mets could use some punch from the right side, they don’t need a guy who’d likely get a punch from Paul LoDuca in the dugout before his first at-bat.

Oh, it would be nice to see Dotel back in the uniform in which he began his career. However, he’s pitching lights out lately, and a bidding war has begun. The winner of this auction will overpay — something Omar Minaya is too smart to do.

There really isn’t any evidence of a rumor here, but nostalgic Mets fans would like to believe there is. If Piazza is dealt, it will be to an American League team, to continue being a DH. When Omar showed Piazza the door two years ago, he locked it behind him. Sorry guys.

10. Jermaine Dye
The Mets need a righthanded bat right now, and Dye is available, so it would appear to be a no-brainer. Except, Omar Minaya is confident that Moises Alou will return (even if we’re not), so he’s not making a deal for a three-month rental with a bad quad who will likely platoon with Shawn Green. Maybe — just maybe — if the White Sox were willing to trade Dye for Willie Collazo and a bag of balls, the Mets might listen. But the Mets aren’t the only team looking for an impact bat, so my guess is ChiSox GM Ken Williams will hold out for the best offer (most likely coming from Anaheim).

11. (Spinal Tap Bonus) Joe Blanton
The Mets could use this workhorse, but the original winter bargain price of Milledge, Pelfrey/Humber, and Heilman has gone up with the heat of the pennant race. No thank you, Mr. Beane.

Back Who’s That Guy on the Bench?
Next Mets Game 96: Win Over Dodgers