The Mets continue the ridiculous and annoying part of their schedule that involves playing against teams that do not play baseball, but rather some bastardized variation of the sport. The ironic part of this “interleague play” is that pundit after pundit bemoans the fact that the AL teams are at a “disadvantage” because their one-dimensional designated pinch hitter cannot participate. But it gets even more comical when people suggest that the game becomes “dangerous” because the pitchers have to bat and possibly run the bases.

Dear lord … you mean, the pitchers have to ACTUALLY PLAY BASEBALL? What an abomination! How could such a life-threatening proposition be thrust upon them?

And as for the experimental designated pinch-hitters who have to sit out these contests in NL cities, I feel absolutely terrible that these invalids are so completely uncoordinated that they will publicly embarrass themselves and put both their health and their team’s chances at risk by playing the field.

Anyway, I digress … or did I regress? … this is supposed to be about the Mets vs. the A’s. I’ll make it as quick and painless as possible.

I’ve never heard of Josh Outman. He does have a spectacular name for a pitcher, though. What could be better than “Out man”? Maybe “Strikeout guy”? Certainly better than a pitcher with the unfortunate name of “Homer”.

I’ve heard of Gonzalez but don’t know much about him. He’s supposed to be pretty good. I’m not sure whether “Gio” is a name similar to “Joe” or “George”, and I’m not sure it matters. What’s important is that he’s lefthanded, so that means Ronny Paulino will be in the lineup.

I think Graham Godfrey was either one of the members of Bread, a tight end on the Jets, or a cartoon character on a cereal box (wait, maybe that is Coco Crisp?). This Graham Godfrey, however, is a righthanded rookie pitcher for Oakland. I know nothing about him.

OK that was pretty insightful, wasn’t it? Let’s move on to some general tidbits about the A’s.

Rich Harden is property of the A’s again after a brief hiatus =spending time on the DLs of the Cubs and Rangers. He still has horrendous mechanics and injuries himself regularly. We probably won’t see him in this series as he’s (surprise!) currently rehabbing from an injury.

Hideki Matsui is now on the A’s. You might remember him as being on the other NY baseball team.

One player you are likely to recognize is Josh Willingham. He still strikes out quite a bit, takes walks, hits a few homers, and plays mediocre defense.

Andrew Bailey is in their bullpen, but the closer is Brian Fuentes. It just so happens that our friend Angel Borrelli analyzed Bailey’s mechanics during the spring, made recommendations on what needed to be fixed, they were ignored, and he wound up back on the DL. He returned from the DL on May 29th and has not been nearly as effective as he was in the past. And yes, those dangerous mechanical issues are still there, uncorrected.

The A’s have a guy named “Sizemore” on the team, but no worries, it’s not Grady (nor is it Ted). They also have someone named “Weeks” but it’s neither Rickie nor Steve. Further, there is a “Jackson” but it’s no longer Reggie (nor Edwin, Michael, Tito, LaToya or Janet). And they have a “Suzuki” but it is a catcher, not a motorcycle nor Samurai.

Manager Bob Geren was recently replaced by his clone. He was removed from the dugout during an invasion of the body snatchers and replaced by an emotionless alien duplicate named Bob Melvin.

My dear wife was recently in the Bay Area and brought back for me, as a gift, this awesome throwback shirt: 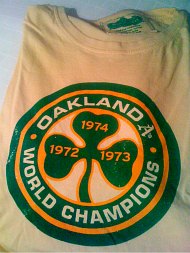 A grocery clerk took one look at my shirt and asked, “is that from some kind of drinking competition?”

Grocery clerk: “Your shirt — did you win it in a drinking contest?”

Grocery clerk: “Well, it has that clover so I just assumed it had something to do with an Irish pub or drinking or something.”

Me: “Uh …. ?”
At this point I gather my bags of produce, think about how old I am, and hustle out of the store as quickly as my arthritic knees will take me.

Final thought: the last time these two teams met, the Mets swept the A’s in three games. Among other things, Paul LoDuca was the backstop back then, Carlos Gomez was patrolling centerfield, Shawn Green was swatting homers, Sandy Alomar, Sr. resembled a windmill as third-base coach, and John Maine represented the future of the Mets pitching staff. Otherwise, not much has changed since then.

Back Wally Backman To Manage Marlins?
Next Mets Game 73: Loss to Athletics