Perez vs. the Pirates 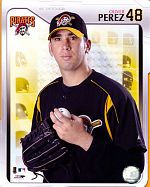 So Oliver Perez will make his first career start against his old team, the Pittsburgh Pirates. Knowing he’s an emotional guy, one wonders if he’ll be seriously amped up for the start — possibly too keyed up to be effective.

Interestingly, Ollie was beyond gracious when questioned about his rediscovered success in a Mets uniform. In the Pittburgh Post-Gazette:

Asked yesterday in the New York clubhouse if he would be pitching as well for the Pirates as he is for the first-place Mets this season — 9-6 record, 3.00 ERA, 99 strikeouts in 108 innings — he replied quickly and emphatically, “Yes, for sure. I’m sure of that. You see a lot of players in the majors who have a bad year, then a good one.”

He then pointed back to his career year with the Pirates: “I pitched well in 2004, and I was in Pittsburgh. I could do it again.

“I was just thinking too much those last two years in Pittsburgh,” Perez replied. “I was putting too much pressure on myself. Then, they sent me down … and traded me. It was not easy.”

“But I came here, and there were a lot of guys with experience, guys who have been in my situation. They just told me to believe in myself. Just play baseball. Enjoy it. And that’s what I did. I feel now how I did in 2004.”

When he was asked, how did his pitching improve? Some have credited New York’s highly reputed pitching coach, Rick Peterson, for harnessing Perez’s mechanics and creating a fresh level of consistency.

Perez shrugged that off, too.

“It’s not something he told me about mechanics. He just told me to believe in myself, to believe in every pitch, and everything would be OK.”

And the velocity that has made a lively comeback?

“I just feel more comfortable, so I’m throwing harder. But it’s still not about that. It’s about the pitches that I’m making. I’m locating the fastball and changing speeds. I feel like a pitcher right now. I’m not just throwing.”

This much is clear as can be: Perez is eager for tomorrow.

“It’s great to see my old teammates, and it will be fun to pitch against them.”

Good quotes by Ollie. It would be very difficult for him to agree that Rick Peterson had a profound effect on his pitching, without offending the coaches in the Pittsburgh organization who worked so hard to get him on the right track. And if you followed the Pirates, or Ollie’s career pre-Mets, you’d know that Pittsburgh pitching coach Jim Colborn and others in the organization did in fact try everything under the sun to bring Perez back to his 2004 form.

But sometimes a player simply needs to get out of an environment, and / or hear the same things from someone else before it clicks. Personally, I don’t think there’s any way that Perez has the same stats and form this year as a Pirate — in fact, I’m not certain he wouldn’t be still toiling in AAA right now. However, that’s less because of the perceived ineptitude of the Pirates and more because Ollie was due for a change.

In any case, Ollie’s comments show he’s a class act, and a guy who takes responsibility for his actions.