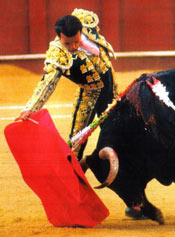 In case you’re wondering, the picture to the right is of the great matador, Jose Lima Granada, a.k.a., “Lima de Estepona”. I show it here as a frame of reference and inspiration to Jose Lima, a.k.a., “Lima Tiempo”. Check it out, Jose. No, not the fancy threads and phat hat, though I’m sure those are the first two things you noticed. Check out the technique of this grand toredor. If you look closely, you’ll see that the matador is avoiding the bull. He draws the bull in with the capote (the big cape), teases him, toys with him, until the point we see here, where he drops the muleta (a smaller red cape), the notification to the crowd that the bull is about to meet his demise.

Lima de Estepona is very good at what he does; if he wasn’t he’d be dead. Our Lima is not so good. But despite his ineffectiveness, he still lives, and gets paid a substantial sum of money to boot. However, for the good of the Mets, I hope that LimaTime can learn something from his overseas cousin, and avoid the bulls, rather than attacking them directly and tormenting them, because it is clear that he does not have a muleta nor sword with which to kill these bulls. Though he throws a fastball, it is no estocada (more banderilla, actually).

Unfortunately, the Mets’ Jose Lima resembles more of a rodeo clown than a matador. And he looks more like a minor league freak show than a bonafide Major League pitcher. Lima Time is over, at least in New York. It’s time to let this sorry excuse for a pitcher to return to the independent leagues, where he will be valuable as a crowd-pleaser and entertainer for some attendance-hungry minor league team.

(Go ahead, Google the terms. If nothing else, Jose Lima will help you learn a little about bullfighting … which in many ways is remarkably similar to baseball.)

Back Game 40: Loss
Next Pitching Options