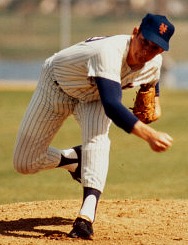 Over the last couple of weeks, ESPN has been running the film “Catching Hell” from their exquisite 30 for 30 series. Directed by Oscar winner, Alex Gibney, the made-for-television documentary details the story of one Steve Bartman. Bartman as many may recall has been labeled the most recent scapegoat for the Chicago Cubs championship drought after he ran interference for Cubs left fielder, Moises Alou; reaching out over the stands for a foul ball that Alou was destined to make a play on. The umpires quickly ruled it fan interference, gave Luis Castillo of the Marlins the base, thereby opening the floodgates for what became an eight run inning late in game six of the 2003 NLCS. The move as believed by many cost the Cubs their long warranted shot at the title.

In truth, curses are no stranger to baseball.  One need look no further than the 1986 World Series where the then perennial losers, the Boston Red Sox, had the New York Mets down to their last strikes, but thanks to Bill Buckner and a comedy of errors that followed, the Sox lost and had to wait nearly two more decades for their first World Series since 1918.  Inasmuch as hexes are familiar to baseball they are common in all walks of sports. The Detroit Lions have the Curse of Bobby Layne, whom after being traded in the 50s put a jinx on the team for 50 years (though based on their season thus far, perhaps it’s finally over).  There’s the Madden Curse. where If you end up on the cover of the Madden football video game, you’re all but guaranteed to go down in injury or failure (just ask Eddie George, Daunte Culpepper or Michael Vick).  The Buffalo Bills can’t seem catch a break once losing three Super Bowls in a row, and in the NHL . . .  no Canadian hockey team has won the Stanley Cup since the early 90s! Talk about futility.

. . . . and then there are the New York Mets. Yes, let’s move back to the matter at hand. This is a baseball blog after all. In December of 1971, the Metropolitans traded a promising young pitcher named Nolan Ryan to the California Angels as part of a four-player package for veteran infielder, Jim Fregosi. At the time, future Hall-of-Famer, Ryan was lacking control and simply didn’t fit in with the Mets long terms plans. This trade, as we know, is a decision that haunts them still some 40 years later.

Currently, the Mets and the San Diego Padres are the only teams in major league baseball not to throw a no-hitter. The Padres retain the luxury of having been around seven years less than the Amazin’s, but that’s not saying much for them either. So, what is it that’s our beloved Mets back? Have they even come close? The answer is: yes, they have; on too many occasions one might even say. Here’s a quick rundown on a few of the Mets “one-hitters” throughout their history of which there are 35!

Every couple of years, the Mets get close to removing themselves from such an inauspicious club, but it never quite happens. Looking at the current Mets starting rotation, there is promise for them to land that elusive but well lauded pitching achievement. Both Jon Niese and R.A. Dickey have had recent one-hitters. Johan Santana, when healthy, is almost unstoppable. However, it’s hard to look at Mike Pelfrey , who may or may not be back, and Dillon Gee and go — these are our guys.

We also have to remember that a lot goes into a no-hitter. Of course, your pitcher having the night of his life is of great help. Fast pitches, strong control, and an even temper, but for every quality start by a pitcher he is still far reliant on his fielders to back him up and deliver not just the spectacular, over-the-fence grabs, but also that routine play up the middle. If Angel Pagan loses one in the sun, it’s no one’s fault but his, but that box score will record that hit and so will “one-hitter” history.

There’s no way to predict when, how, who, or where the Mets will get their very first no-no. Fifty years is a mighty long time to be without anything. Twenty-five years without a championship isn’t so fun either. On the bright side once a Mets pitcher leaves his Flushing confines he is wiped clean of the curse.; just ask Dwight Gooden, Mike Scott, Hideo Nomo, Tom Seaver and David Cone, all of whom pitched no-hitters AFTER leaving the Mets.

Are the Mets cursed? On paper they are. Maybe they should just sacrifice a goat or something. Until then, follow Mets Today on Facebook for all the latest Mets updates, scoops and insight.

Born on Long Island, but currently living the dream in Hollywood, I'm a die hard Mets fan since birth. Raised in the era of Doc and The Kid, I long for the days of Shea Stadium and another championship.
Related Articles
Recent Comments
Recent Posts
Subscribe to Posts (RSS)