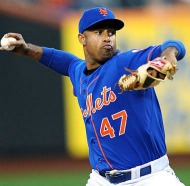 Back Time To Let The Grown-Ups Do Their Job
Next 2011 Analysis: Manny Acosta