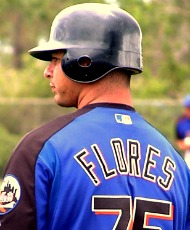 Several years ago, many Mets fans berated the team’s front office, and Omar Minaya in particular, for allowing the Washington Nationals to steal hotshot backstop prospect Jesus Flores via the Rule 5 Draft.

At the time, Flores was a 22-year-old coming off a 21-HR, .268 AVG, .822 OPS campaign for Port St. Lucie in high-A ball. As difficult it was to see Flores snatched, an objective eye would not be nearly as harsh in criticizing the Mets for losing him as we Mets fans — because seriously, how many MLB teams are willing to keep a 22-year-old A-ball catcher on their 25-man roster for an entire season?

As it turned out, Flores struggled with injuries throughout his career in the Nats organization; the 106 games he appeared in between MLB and AAA in 2008 were the most he ever played in one season. In short, his skill set was stunted, and Flores never truly had the opportunity to hone and develop into a bona fide MLB catcher.

There was a possibility that the Nats would non-tender Flores, but they chose to sign him only hours before tonight’s deadline. However, just because they signed him doesn’t necessarily mean they’ll keep him. After all, the Nats already have Wilson Ramos slated to be the starting backstop, and they have two very capable youngsters — Jhonatan Solano and Derek Norris — waiting in the wings. The Nats likely kept Flores not because they need him, but because they realize catchers of any ability are highly prized assets right now; they likely can trade him for something of value.

What do you think? Should the Mets make a play for the now 27-year-old Flores? Why or why not?