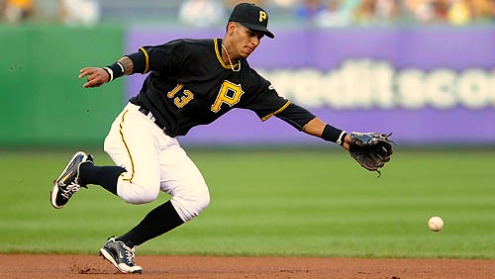 You likely have seen Cedeno play at least a few times; he was on the Pirates the last two years, and began his career with Cubs back in 2004 — where he remained until 2009, when he was traded along with Garrett Olson to the Baltimore Orioles for former Met hero Aaron Heilman. Chances are, he was playing and you didn’t even notice him — which can be good or bad, depending on your perspective. Your vague recollection might be of someone who looked like he was a decent fielder, an “eh” hitter, and otherwise blended into the background of the ballgame. But what kind of player is he, really?

The truth is, Ronny Cedeno is, overall, somewhere between below-average to average among today’s MLB shortstops. However, that’s more of an indictment of the dearth of quality MLB shortstops these days than it is a compliment to Cedeno. Step back and take a look at who is playing shortstop in this decade compared to the one previous, and you start to understand why Jose Reyes was given such a long, rich contract — there simply aren’t many today who can provide above-average to good performance on both sides of the ball. Don’t believe it? Check out other teams around MLB and see who their starting shortstop is — if they have one everyday guy rather than a platoon. You see names like Yuniesky Betancourt, Reid Brignac, Paul Janish, Jason Bartlett, Clint Barmes, and Brendan Ryan. The weakness at the position is the reason why Edgar Renteria and Alex Gonzalez keep getting contracts, and the ageless Omar Vizquel may find a job next spring.

But I digress … this is about Ronny Cedeno and not the state of affairs at the shortstop position.

In terms of raw ability, Cedeno has a strong arm, above-average mobility, and good hands defensively. He would project to be a good if unspectacular shortstop but unfortunately he suffers from frequent lapses in focus and makes maddening mental mistakes that nullify his positives. Offensively, his bat speed is below average to average, his discipline and strike zone judgment are poor, and his running speed is about average. If you look at his batting stats you’ll see someone who: strikes out far too often for a non-power hitter; doesn’t draw many walks; doesn’t steal many bases nor score many runs; drives in very few runs; and, frequently grounds into double plays. Strangely, he once hit 10 homeruns in 376 at-bats (2009) — though he did that while hitting .208. In 2010 he hit 8 HR with a .256 AVG but a .293 OBP. The slugging spurt ended in 2011, as he hit only 2 HR in 454 PAs; though, he did rip 25 doubles, which isn’t too shabby.

At age 29, and after 7 years in MLB, Ronny Cedeno “is what he is”. I don’t foresee him suddenly finding extreme focus on defense, or hitting .300 (though, stranger things have happened). As a starting shortstop, a team could do worse — though, not much worse. For what his role likely will be with the Mets — as a backup middle infielder — Cedeno is well-suited. He can play both sides of the bag well enough, and is probably a better defensive second baseman than anyone else in the organization. If this were 1975, he’d probably be the starting second baseman. But, in 2012, a Major League second sacker needs to provide either a bit more offensively or a lot more defensively.

Financially, I think the Mets did very well by signing him to a one-year, $1.1M contract; some feel that he’s worth at least three times that. Again, look around at middle infielders these days and you’ll understand why that’s so. For the Mets, I see Cedeno getting a decent amount of playing time, as a late-inning defensive replacement at second base but also sending Ruben Tejada to the bench for short periods — i.e., when Ruben runs cold and Cedeno gets hot. Overall, I can’t complain too much about this acquisition, though, it’s not exactly something that gets me excited. The main disappointment is that this would appear to be one of the team’s final moves of the offseason — a “final piece”, if you will.

Thoughts? Could the Mets have done better for a utilityman? If so, by acquiring who? And, how much playing time do you project for Ronny Cedeno? Answer in the comments.

Back Mets Sign Ronny Cedeno
Next Your Hall of Fame Ballot