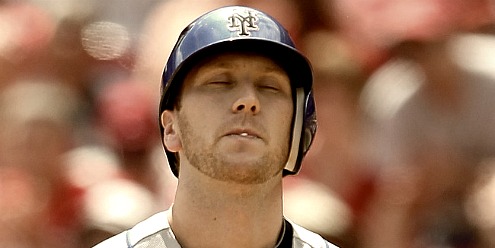 While Bay played in 28 more games and doubled his homerun output, no one would say that 2011 was a success for the veteran outfielder. Rather, it created even more doubt. Prior to joining the Mets, Bay’s career OPS was a shade under .900 — which placed him among the top hitters in the game. If OPS is a stat you’re not familiar with, it may help to tell you that Albert Pujols posted a .906 OPS last year. For perspective: in 2009, the year before Bay joined the Mets, he posted a .921 OPS. But hey, that was in Fenway, a hitter’s park, right? OK, in 2005, with Pittsburgh, his OPS was .961; in 2006 it was .928. In other words, Bay was a big-time slugger and on-base machine prior to his move to Flushing. Last year, through over 500 plate appearances, his OPS was a comparatively frail .703 — a number would be barely acceptable from a poor-hitting middle infielder.

As in 2010, Bay’s 2011 was marred by injuries — but, pain was not the only blame for his woes in either year. What we’ve seen from Bay in his time as a Met is lack of confidence, multiple stances, and general confusion at the plate. To his credit, Jason Bay‘s defense has been much better than advertised, and his effort has been admirable. He hustles, he plays hard, and he does all the little things you want to see from a ballplayer; unfortunately, he hasn’t done the one big thing he is paid handsomely to do, which is hit like an All-Star.

The multimillion-dollar question is this: is Jason Bay finished? His swift and drastic slide to mediocrity just after turning 30 is eerily similar to other sluggers of the past, such as Robin Ventura, Bobby Higginson, Jacque Jones, Von Hayes, Dale Murphy, Shawn Green, and Andruw Jones (to name a few). Watching Jason Bay play over the past two years, it looks as though his sheer athletic skill — i.e., hand-eye coordination, hand strength, and bat speed — may have compensated for his less-than-ideal hitting mechanics during his youth. It’s plausible that those skills have deteriorated with age, thereby exposing inefficient execution (such as striding toward the plate / diving, rushing hands forward, etc.).

Generally speaking, if a Major League hitter is in his 30s and not using performance-enhancing drugs, his skills are unlikely to drastically improve after they’ve drastically declined. Since Bay turned 33 last September and PED use is prohibited in Bud Selig’s baseball company, it’s hard for me to expect Jason Bay to return to the form that earned him a 4-year, $66M contract.

At the same time, it’s hard for me to accept the idea that Bay is a sub-.250 hitter who will be lucky to hit 15 homers over a full season of play. But, that’s my emotions thinking; from his days in Pittsburgh, I’ve loved Bay’s approach to the game and always enjoyed watching him play. I’ve had similar, irrational feelings for other Mets in the twilight of their careers, such as the aforementioned Ventura and Green, Mo Vaughn, Jeromy Burnitz, and Willie Montanez — as much as my eyes were telling me those players were finished, my heart was hoping my eyes weren’t seeing clearly.

In 2012 I’m going to keep my expectations low for Jason Bay, but at the same time I’ll be pulling for him — hard — with every at-bat he takes. As a streak hitter, he has a shot at finding his stroke and getting hot just long enough to become a trading chip at the deadline — much like the Burnitz turnaround of 2003. If you remember, Burnitz was Africa-hot in May and followed that up with 8 homers in June, setting up a trade to the Dodgers that brought back three prospects — one of whom eventually was flipped for Mike Nickeas. But I digress … the Mets fan in me is going to go on a limb and say that Jason Bay will start slowly, heat up in June, and get dealt at the deadline for marginal, A-ball prospects — with the Mets eating little to none of the cash left on his contract. You heard it here first.

What do you think? What’s your hope and/or projection for Jason Bay in 2012? Answer in the comments.