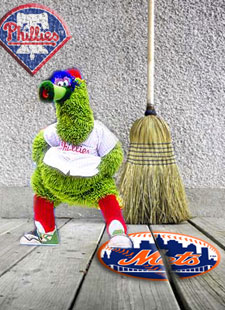 Sorry it took so long … Weehawken’s finest are not well-prepared for roof-jumpers. Luckily the FD came by with a net strong enough to withstand my 220-pound frame.

I don’t even know where to start … no point in re-hashing … we’ll go straight to the notes.

El Duque was due to have a bad day, what are you gonna do? Willie made the right move pulling him to keep the rally going … though, you wonder if Duque might have rapped a hit himself in that situation.

For the majority of the contest (the first three hours), it seemed like the only Met who understood he had to elevate his game was David Wright. Endy Chavez tried to provide a spark as well (2-5, 2 runs, 2 RBI), but Wright singlehandedly kept the Mets in the game, going 3-for-4 with a walk and two runs scored and making countless fine plays in the field.

Willie made another good move, bringing in Billy Wagner to face the heart of the Phillies lineup in the eighth. However, he forgot to remove Wags in the ninth. Had Billy pitched an easy, 1-2-3, 10-pitch inning, then fine — leave him in to close things out. But after seeing him struggle a bit, and throw over 20 pitches … be smart. Once again, the myopic Randolph managing a game like it’s the 7th Game of the World Series, not considering that there are three games with the Braves this weekend. In the end, Wags threw 45 pitches with an already “dead” arm — he’s done till Sunday, at least.

John Maine goes against Tim Hudson. If ever there was game that Maine needed to rise to the occasion and pitch a 9-inning shutout, it’s tonight. Game time is 7:35 PM, it will be carried on WPIX / CW-11.

Back Mets Game 132: Loss to Phillies
Next Series Preview: Mets vs. Braves V