Why is Johan Santana Long Tossing?

Ever since Johan Santana arrived in Port St. Lucie, there have have been reports of his “long toss” sessions — where he throws at a distance up to 175 feet.

Why, exactly, is Johan Santana heaving a baseball almost three times the distance between the pitching rubber and home plate?

Before you say, “because that’s how a pitcher builds arm strength,” STOP. I’m well aware of that theory / assumption / fallacy / myth. It was instilled in me 25 years ago, before pro baseball had the benefit of advanced medicine, slow-motion video, and scientists who studied athletic movements. Still today, there is a legion of “old school” baseball men who hold dear to their heart this illogical notion that throwing a ball like a rainbow somehow increases velocity and “builds arm strength”. These people choose to ignore science and mountains of research stating that a) long toss does nothing for pitching velocity; and b) long toss does in fact place significant, unnecessary stress on the arm — the elbow in particular, and the shoulder secondarily.

Now, I will agree that long toss “builds arm strength” — IF, the goal is to be able to throw a baseball on a high arc over a long distance. This type of throw might be helpful, for example, in a long-toss competition. It might be helpful for a quarterback, or for someone who throws a javelin. But in baseball — and especially, on a pitcher’s mound — there is no use for such a throw.

That’s not to say all long-distance throwing is bad. There is a safe and beneficial way to throw at an extended distance that can help build the kind of arm strength that is useful in a baseball game. Generally speaking, the distance rarely extends beyond 100-120 feet, because once a player tries to throw further than that, his mechanics change — specifically, the athlete begins to tilt his hips and release the ball earlier. Once the mechanics change, there isn’t much to gain from the activity — all it does is introduce risk.

So why would the Mets — who are paying Johan Santana nearly $50M over the next two years — allow him to do anything that is risky? The man is trying to come back from a serious shoulder injury, and by allowing him to long toss, they’re putting both his shoulder and his elbow at risk — does that make any sense?

Please understand, I’m not against the idea of throwing to build arm strength — for all pitchers, including Santana. What I’m against is the type of high-arc long tossing that does absolutely nothing for a pitcher.

Instead, I’d like to see Santana (and all pitchers), maintain their proper mechanics with every throw they make — including in warmups — and gradually extend the distance to their target. As long as the ball is being thrown on a downward plane, and the mechanics stay the same, the distance can increase. The moment a pitcher needs to change the arc of the throw, the release point, and/or tilt his hips, he needs to stop and move back five feet.

Let’s take a look at what Johan is doing when he long tosses — photos courtesy of Michael Baron of MetsBlog.com. 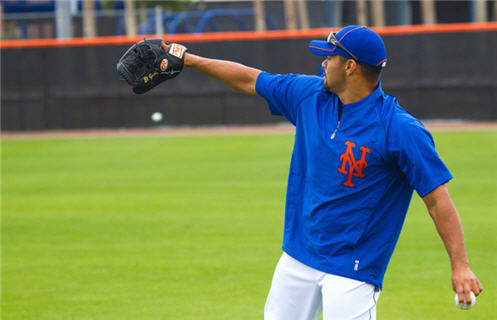 What’s immediately noticeable is that he has tilted his hips, is pointing his front side (shoulder) up toward the sky, and his head is also looking up — as if he’s visualizing a long, rainbow-like arc of a throw. Great form for heaving a javelin for distance, fairly useless for a pitcher, because a pitcher stands on a mound and throws DOWNHILL. What is the logic of throwing up toward the clouds when your main activity is throwing down to a squatting catcher?

Here’s a following frame of the same toss: 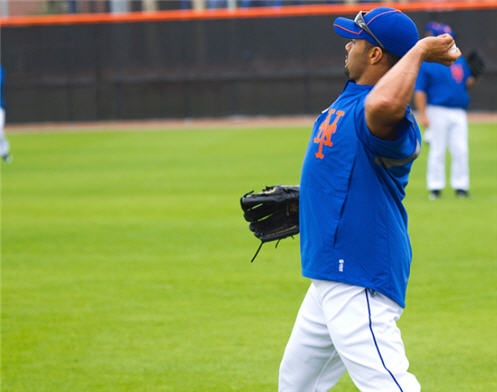 The head is still looking up, and his chest is also pointed up. Although you can’t see his legs fully, it’s clear that his stride is very short — maybe two or three feet at most. Johan’s pitching stride is about 6 feet. 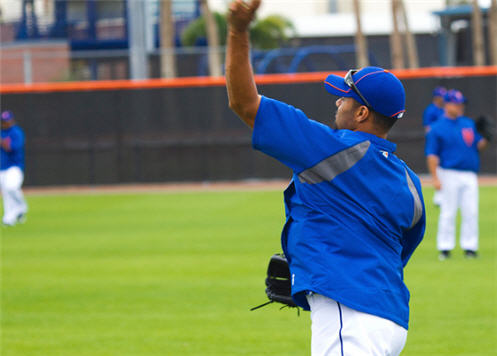 Looking at where his arm and hand are, where do you think the ball is going to go — upward or downward? Pitchers never release the ball that high nor that early; if they did, the ball would go over the backstop. So why practice that kind of a release point if it won’t be used in the game? 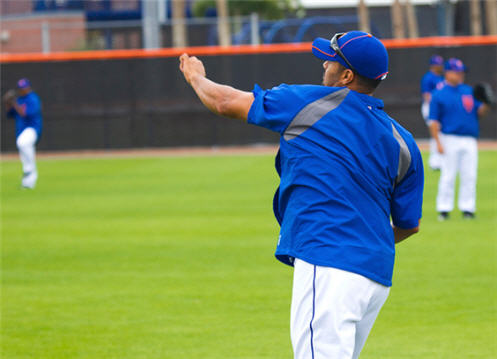 The hand is still going up, and the head is still looking up. A pitcher never does this on the mound. More importantly, by throwing upright like this, deceleration of the arm is absorbed almost completely by the shoulder. In other words, Johan is not using his trunk and legs to slow down his arm as he would in a pitching motion — most of the strain of slowing down is on the elbow and the shoulder. You know, that shoulder that required major reconstructive surgery. Granted, he’s not throwing with much velocity, but there is a substantial amount of force to heave a ball 150+ feet — and why would you want to subject a healing shoulder to this kind of unnecessary strain?

According to what has been reported in the media, it sounds like Johan has always incorporated long tossing in his routine, and he’s the one who made sure long toss was included in his program this spring. Note this quote by Mets manager Terry Collins, via MetsBlog:

“During his preparation, he likes to long toss, and we forgot to include that in his program,” Terry said. “He is still on target for Opening Day.”

I truly wonder if the Mets “forgot” to include long tossing in the program, or if someone who knows better — i.e., a doctor, physiologist, biomechanics expert, kinesiology scientist — purposely left it out?

Here are the facts, based on scientific study: pitching velocity comes from proper mechanics, more specifically, the ability to perfectly time the lower body with the upper body so that they’re working together to propel the ball — which some call “separation”. Most of the force that results in velocity comes from the lower half — the legs and the hips. Very little comes from the arm and the shoulder. So this idea of “building arm strength” by long tossing doesn’t make much sense, unless the pitcher somehow incorporates the full motion and works on that “separation”. I’m not seeing that from below video, taken during one of these long toss sessions:

What I am seeing, however, is the elbow and the shoulder being used as the “brakes” to slow down the arm — not good. When it comes to keeping a pitcher healthy, the slow-down phase of a pitch or throw is more important than acceleration. Long tossing in the fashion above doesn’t do too much, if anything, to develop and maintain good deceleration mechanics.

The irony is that Johan has shown outstanding “separation” in his bullpen sessions. Unfortunately, his arm action is downright frightening — but we’ll get into that in a few days.

What’s your thought? Should Johan be long tossing? If so, why?