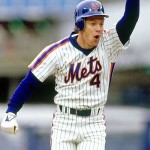 We'll always have this moment.

As if the Mets don’t already have enough problems with their current team, a prominent member of their past received some bad news today.

“Los Angeles County Superior Court Judge Cynthia Ulfig sentenced Dykstra after refusing to allow him to withdraw his plea and said the scam to lease high-end automobiles from dealerships by providing fraudulent information and claiming credit through a phony business showed sophistication and extensive planning.”

Apparently, he learned everything he knows about business from the Wilpons.

Oh, and I’m sure it’s just a coincidence, but every article about his sentencing identifies him as an ex-Met.  He played for the Phillies, too, you know.

Back David Wright Out – But for How Long?
Next Santana Debuts, Throws Two Innings