Ankiel Above the Law 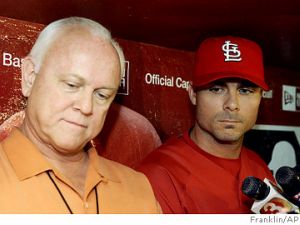 By now you no doubt have learned about Rick Ankiel’s eight shipments of HGH received back in 2004. Perhaps you have even begun to form an opinion on the situation.

Well, in case you’re still on the fence, new information has come to light that may help sway your opinion one way or another. St. Louis Cardinals GM Walt Jocketty has made an announcement that should completely clear Ankiel’s name and put everyone’s concerns to rest:

Further, Ankiel himself assured us that any shipments he received — including the HGH — were completely legal because they were prescribed by a doctor.

“All and any medications that I have received in my career has always been under a doctor’s care, a licensed physician.”

Whew! THAT was a close one! A doctor prescribed the HGH, purportedly to help speed the healing of Ankiel’s elbow after Tommy John surgery. All completely on the level. And here we thought maybe Ankiel had — gasp! — done something wrong!

Except for one thing: HGH cannot legally be prescribed for helping baseball players recover from injuries and surgery.

Did Jocketty and Ankiel really expect us to listen to their blasphemy and come away with a “oh, OK, that makes sense.” Does Jocketty think we’re all a bunch of friggin’ morons with ” … there was no violation of any laws … ” ????

No violation? Oh reaaaaaaaalllllly …. so, then, um, why are there federal agents looking into this shipment as part of an investigation? Are they spending millions of taxpayer dollars for fun — or is there the slight possibility that someone here did something against the law?

And, since when is the opinion of Jocketty, Ankiel, and some sleazy doctor above that of the US FDA? Because according to the FDA, HGH can be legally prescribed for:

Hmmm … I’m looking at the above list and I don’t see “Recovery from TJ surgery” … unless “Cachexia” is a nifty medical term for moving an elbow ligament (it’s not).

Oh, but let’s just get off the poor kid’s back already … he’s accomplished something wonderful this year, what a feel-good story … let him continue the story … what’s the big deal?

That sounds remarkably similar to another feel-good story about a slugger from St. Louis, doesn’t it? Back in, oh what was it? The summer of 1998 I think? Yeah, that was a wonderful story at the time, it made us all feel fuzzy all over.

And then the truth came out. And the big lug refused “to talk about the past”. How do you feel about that “magic summer” now, after finding out it was all a big lie? Of course, I can’t speak for you, but I feel duped, cheated, lied to, disrespected, and played for a sucker. But that’s not even the main reason this Ankiel situation is so distasteful.

For me, the issue is with the youth of America, who once again are being told that, if you want to get to “the Show”, you may have to put illegal substances in your body. And that’s it’s no big deal, because people will forgive you, and you won’t get into any real trouble. Millions of teenagers get this out of it: sometimes you need “an edge” to get where you want to go, or a shortcut. And if you’re not willing to take the risk, you may not make it — because “everyone else” is probably doing it.

That’s not the message I want kids hearing — kids who could get themselves really screwed up before they get a taste of life. It would be nice if we could tell young athletes, “work hard, do your best, respect your body, others, and the rules, and with a little luck, you may one day make it to the pros.” But I guess that’s an old-skool pipe dream in these days of shortcuts, cheaters, and instant gratification.

I’ll end with this quote from the congressional hearings of March 2005, by Donald Hooton of Plano, Texas, the father of a high school baseball player who committed suicide in 2003 after steroid use:

“Players that are guilty of taking steroids are not only cheaters, you are cowards.. Show our kids that youâ€™re man enough to face authority, tell the truth and face the consequences. Instead, you hide behind the skirts of your union, and with the help of management and your lawyers youâ€™ve made every effort to resist facing the public today.”