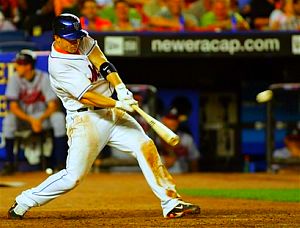 It was a classic pitchers’ duel between Oliver Perez and Tim Hudson.

Hudson made few mistakes, but Perez made a few less.

Ollie went 7 full innings, allowing two runs on five hits and two walks, striking out 7. He was focused, pitched with a consistent arm angle, and was on top of his game. It was one of his most impressive performances of the season.

The Mets could muster only one measly run against Hudson through the first five — the lone run scored by Jose Reyes in the initial inning on a groundout by Carlos Beltran. Hudson was rolling ground balls like it was his job, as the Mets killed worms for five innings. Then in the sixth, Reyes led off with a walk, and was sacrificed to second on a great bunt by Luis Castillo, bringing up David Wright. Wright worked the count to 2-2, then went down and drove a flat sidearm slider into the leftfield bleachers for his 28th homer of the season, making the score 3-0.

Perez began the following inning — the seventh — with two quick outs sandwiching a single by Jeff Francoeur. He then went to a full count to Brian McCann before uncorking one of his few mistakes of the evening — a waist-high fastball that got a bit too much of the plate. McCann jumped all over it, blasting it over the rightfield fence to make the score 3-2. Ollie kept his cool and rebounded by striking out Willie Harris, whose body language clearly screamed that he wanted no part of facing Perez at that time.

Aaron Heilman came on to pitch a perfect eighth, bridging the gap to Billy Wagner, who pitched a 1-2-3 inning capped by a sliding catch web gem in the gap by Beltran to end the game.

A turning point in the game came in the sixth, when the Braves got men on first and second with none out and Edgar Renteria at the plate. Renteria lined out to Wright, then Perez picked off Hudson straying too far from second to squash the threat (a perfect timing play between Ollie and Luis Castillo), and Perez proceeded to strike out Matt Diaz looking to end the inning.

Castillo is really hobbling around on that bad knee, but is somehow gritting through it and both making plays and running the bases well. It’s kind of scary — if his knee were healthy, I think he’d be getting to a few more balls, stealing more bases, and hitting at least 15-20 points higher. And yet he’s still been remarkably effective on the bad wheel.

Reyes finally drew a walk — his first in 37 at-bats — and added a hit and his 75th stolen base. He still looks like he’s jumping a bit at the ball, and making his decision to swing too early, but on several pitches he stayed back the way he should, letting the ball get deep. I’d be fine with him slowly getting his stroke back, then exploding in, say, October.

David Wright is hitting like a man possessed. Those MVP chants at Shea may well become reality. Interestingly, the Mets have never had a Most Valuable Player in their history.

Tim Hudson has to be suffering from some kind of shoulder ailment — or at the minimum, fatigue. He was dropping down sidearm far more often than normal, and moving his arm around in gingerly motions. He’s a pretty tough competitor, so it wouldn’t be a surprise that he’s pitching hurt — and it might explain his last few starts, which have been less than stellar.

SNY finally turned down the orange tint a bit. In their postgame show, both Matt Yalloff and Lee Mazzilli looked nearly human.

The Mets and Braves do it again at 7:10 PM. Orlando Hernandez is scheduled to start against Buddy Carlyle — we’ll see if El Duque is good enough to go.

Back Mets Math
Next Collazo or Colazzo?