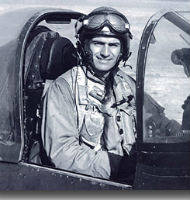 Beyond being a day off of work, Memorial Day honors the men and women who died in battle to preserve the freedom of the United States.

One man who escaped death despite fighting for our country in both World War II and the Korean War was former Yankee infielder and current San Diego Padres broadcaster Jerry Coleman.

Coleman achieved the rank of LieutenantCohlonel in the United States Marine Corps, and earned numerous honors and medals, including two Distinguished Flying Crosses.

Around this time every year, Coleman appears on various radio and TV shows, and as a result I think the importance of what he did for our country may be slightly diluted. You know, when you hear/see the same person every year at the same time, the effect can be a loss of luster.

To combat (pardon the pun) that possibility, I’m taking the time now to honor him — and all of the men and women who put their life on the line for our freedom. In case you weren’t aware, Jerry Coleman flew 120 combat missions as a USMC aviator. Wow. 120 times, he went into the air with every reason to believe he would not land alive. Think about that for a moment. Can you imagine doing that yourself, even once? I can’t. Can you imagine one of today’s MLBers putting his baseball career aside, and hurtling himself into the air to fight for our country?

Mind you, I’m not a fan of war, and not suggesting that every war our country has fought has made sense. Today, I would like to put the politics aside and simply honor those Americans who served — and died — in battle.

Thank you for going to war, so I didn’t have to.