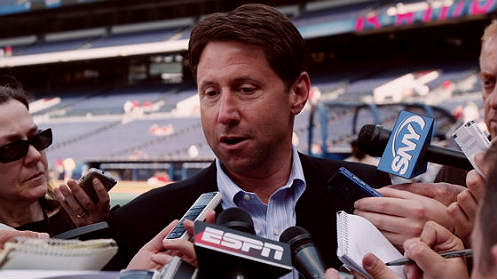 Before getting to the main topic, congratulations to Johan Santana. Before the season started, I expected this Mets team to be a laughingstock and on the wrong end of at least 90, if not 95 games. Instead of bumbling through another miserable season, the Mets are perhaps serving notice that 2012 is the season they turn the corner. The clubhouse culture has changed, there are promising young players both here and in the pipeline, some key veterans are finally healthy and playing time is being doled out on merit, instead of contract status or cronyism. The best part of the season was that it had been played without a peep from either Wilpon.

Well, that streak ended last Wednesday, when Jeff Wilpon appeared behind a microphone to discuss a potential contract extension for Third Baseman David Wright. Jeff spoke nicely about how important David is to the team, the city and to him personally and how he thinks the extension talks “need time” to “see how it plays out.”

Wow, what relevancy. What’s next, he’s in favor of sunshine at day games, shorter lines at the Shake Shack and no delays on the L.I.E? This reminds me of someone who while taking shelter from a rainstorm, sticks his hand out from underneath the cover to see if it is safe to come out again. Perhaps he is following the direction of some PR firm on how to repair his mangled image. “Go out and talk nice about David Wright, Jeff; see how people react.” Consider this a thunderclap, Jeff and please go back inside. Fortunately, Wright ended this useless speculation over the weekend, stating he will not re-negotiate a contract during the 2012 season.

Back to Jeff. Remember, this man is the Chief Operating Officer of the Mets. In theory, only his father, who owns the team, has more power. Family ties apparently trump training, education or experience as qualifiers for the COO spot. Yeah, as the owners they can do whatever they want with the team, I get that. What makes it tough is how they continue to act like they think they can hoodwink perhaps the most wised-up fan base in all of the sport. Did anyone else think those comments sounded a lot like the ones GM Sandy Alderson said last year about Jose Reyes? Does anyone else get the feeling that Jeff may be taking advantage of our distraction over the team’s play to wriggle his way back into the picture?

Back in February, I was inspired to post that the Wilpons have a credibility problem. As was pointed out years ago here, even Jeff’s claim to have played minor league baseball is specious. The Wilpons are very successful in other areas, are probably very deserving of their wealth and have certainly supported some worthwhile ventures, but when it comes to the Mets, they just can’t seem to do much right. Look no further than Jeff’s signature COO project, overseeing the Citi Field construction. Notice that it has been nearly completely made over since its 2009 opening? Even worse, it was hinted anonymously that those horrific outfield dimensions were the brainchild of the since disgraced and departed Tony Bernazard. I wonder who leaked that?

Despite the improved play, recent history shows the Mets to be a very combustible element. Most of their immolations these past few years occurred in late July and early August. Avoiding another one again this year is the big challenge facing Alderson and manager Terry Collins. That gargantuan task will only be made harder if a spotlight-jonesing owner’s son is crouching in the shadows just waiting to interject himself once more back into the center of the mix.

So what to do? As Friday night showed, it is getting harder and harder to stay away from the product on the field. I have long been an advocate for a home-grown team. Well we have one now and I really like it. I can’t ignore them.

We do however, have another option. Ever since this image-conscious regime went too far and broke up 1986-1988 Mets, they have never ceased fretting over public opinion. There was a passage in The Worst Team Money Could Buy about someone (I think it was Fred) opening the Post, the News, Newsday and the Times each morning to “see what those bastards are saying about us now.” Public pressure swayed them to trade for Mike Piazza. (Just ask Mike Francessa). More recently, look at how quickly they shoe horned in a Mets Museum and other Metsian trappings at Citi Field after the collective WTF over its debut as homage to the Brooklyn Dodgers.

They pay attention. So, tell Jeff to shut up, sit down, and let the baseball people make the baseball decisions (there’s a concept). Sound off here, on Metsblog, the Met Home page, Twitter, WFAN, 1050, SNY, the papers, at restaurants, over beers, at the water cooler. Remind him again and again and again that we are both wise to and fed up with him.