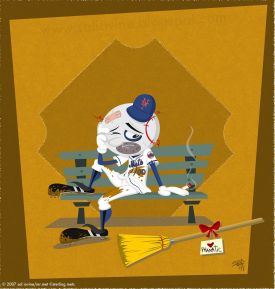 So it wasn’t necessarily the Phillies that were the problem — it’s the Mets, who are finding new ways to beat themselves every day.

It was earmarked as a throwaway game when — unbelievably — Brian Lawrence was rushed up from New Orleans to serve as the “emergency starter”. What the heck was the emergency? Because El Duque couldn’t pitch? Don’t the Mets already have Mike Pelfrey and Philip Humber on the roster, in uniform, ready to show what they can do toward a 2008 job?

Coming into the game, Lawrence had a 1-2 record with a 6.83 ERA and 1.93 WHIP. In his last start, at Philadelphia, he was knocked out in the fifth inning after allowing 10 hits, 2 HRs, and 5 runs. In his previous four starts he BARELY completed five innings — though anyone who saw those games knows very well that he was lucky beyond belief to get that far. So it’s not like it was any surprise when he could go only 3 1/3 in this contest — the surprise, in fact, was that he remained on the 40-man roster. Some may disagree, but I would have been more confident to see Jason Vargas on the mound before Brian Lawrence. Just what in the world was Omar, Willie, and the rest of the organization thinking with this decision?

As it was, Lawrence “pitched” (if that’s what you call it) 3 1/3 frames, and gave up 4 runs on 6 hits and a walk. Like Oliver Perez a day earlier, though, he left with the game tied — at which point the Mets brought in another “sure thing” in Aaron Sele. For anyone who has watched the Mets this year, you know Sele is indeed sure to give up at least one run — regardless of the number of innings he pitches. Though Sele worked out of a jam in the fourth (thanks in large part to Paul LoDuca picking Rob Fick off third base), but predictably gave up the go-ahead run in the fifth. He was replaced by LOOGY Scott Schoeneweis, who struck out pinch-hitter Tony Batista to end the inning.

And here’s where Willie Randolph has problems. Willie, if you’re reading, “LOOGY” is shorthand for Lefthanded One Out GuY. That’s what “The Show” is — a guy you use for ONE OUT. However, the cement-head that Randolph is, chose instead to push his luck and use Schoeneweis for another inning. Bad choice — and that’s not coming from the Monday morning quarterback, it’s what was screamed at the television when the bottom of the sixth began.

Hmm … sound familiar? Perhaps you remembered Sunday afternoon’s contest, when the sixth inning “happened”. Well apparently the same copywriter was hired to write Monday night’s story, because again it was the sixth that the Mets had a collective brain fart and gave the game away. First, David Wright allowed a DP ball to skip under his glove. Then, Schoeneweis threw away a bunt. Then, Jorge Sosa forgot to throw out Nook Logan scoring from third on an easy bouncer back to the box. Before it was all over, it was Nationals 9 Mets 4.

The bottom of the seventh wasn’t much better, as the Nats added another three and a pound of salt to the Mets’ wounds. Not much more to say.

Kudos to Carlos Beltran for swinging at the first pitch he saw in the eighth and popping up to the catcher, down eight runs. No need to be smart or fundamentally sound at that point — just get the game over with as quickly as possible.

The Mets wasted a two-run homer by Beltran and a solo shot by Shawn Green. Green was 2-for-3 on the evening.

Willie found a way to use all four of his catchers in the game, wasting Mike DiFelice in a double-switch — only to pinch-hit for him later — and giving Ramon Castro a pinch-hit at-bat in the eighth.

The Washington Nationals came into the game as the worst-hitting, lowest-scoring team in all of Major League Baseball. They amassed 12 runs on 13 hits.

The Phillies bludgeoned the Cardinals and are now 2 1/2 games behind with 13 games to play.

John Maine goes against Joel Hanrahan in another 7:05 PM start. Who knows what might happen?

Note: The image accompanying this article was drawn by Staten Island artist Sal Iovine. Be sure to view his websites IOBLOG and www.saliovine.com to view all of his great illustrations and artwork.

Back Series Preview: Mets vs. Nationals
Next Fundamentals: a Refresh