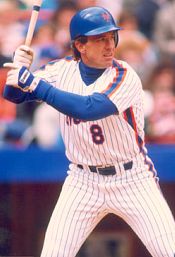 All apologies to former Mets legends such as Phil Mankowski, Rick Sweet, Dan Norman, Chris Cannizzarro, Dave Gallagher, and Desi Relaford (as well as a more respectful one to Yogi Berra) — but the only number eight to honor is “The Kid” Gary Carter.

I distinctly remember the moment that the evening news announced the Mets had made a trade for Gary Carter; it was at first shock, then pure elation — and more exciting than any present I opened two weeks later on Christmas morning. The Mets’ young hurlers and spunky smurfs had given us hope in 1984, and now that the best catcher in baseball would join a lineup that already included Darryl Strawberry and Keith Hernandez — the first legit #3 hitter in Mets’ history — a pennant was seemingly a foregone conclusion. While many point to the acquisition of Hernandez as legitimizing the Mets, in truth it only showed that they were on their way toward being taken seriously. The Carter deal cemented the fact that the Mets were going after first place.

And Carter delivered, as a rock behind the plate and a clutch run-producer in the middle of the lineup. He drove in over 100 runs in his first two seasons, and helped shape the raw young mound talent into stars. Though he smacked 532 basehits in a Mets uniform (regular + postseason), he will forever be remembered for one: a seemingly harmless, two-out single on October 25, 1986 that ignited the greatest comeback in World Series history.